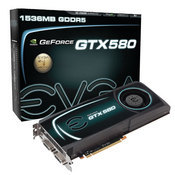 Nvidia has introduced its highest-performing graphics processor to date, delivering as much as a 30% speed boost for hard-core gamers.

The GeForce GTX 580, introduced Tuesday, is based on Nvidia's new Fermi architecture, which features up to 512 processing cores, compared with the 240 cores in its Tesla predecessor. The GPU has been re-engineered from the transistor level up in order to increase power efficiency and boost performance, according to Nvidia.

Nvidia said that the GTX 580 delivers 35% better performance per watt than its predecessor, the GTX 480, and is up to 30% faster. The latest GPU is particularly better at running games that use tessellation, a key figure in Microsoft's latest graphics technology, DirectX 11. Tessellation is a graphics-rendering technique for producing more realistic 3D images. Among the games Nvidia says can take advantage of the GPU's features is "StarCraft II."

Beyond gaming, Nvidia says the GTX 580 excels at playing Blu-ray movies in stereoscopic 3D. The GPU also supports Nvidia's multi-processor platform for gamers who want to use multiple GTX 580s in a PC.

Jack Gold, analyst for J. Gold Associates, said that if the GTX 580 is the fastest GPU in the market today, as Nvidia claims, it's a title that could be surpassed at any time by rivals. "Being the fastest is like being the fastest gun in the West. You're only the fastest until someone comes along and shoots you," Gold says.

More importantly, such high-performance GPUs on the cutting edge today eventually become the mainstream graphics processors of tomorrow, which is an indication of how PCs in general are increasingly becoming more graphics-focused, Gold said. In the meantime, the GTX 580 will compete in the 5% to 10% of the market occupied by hard-core gamers and graphics professionals.

The new Nvidia GPU has a suggested price of $499, and is available as of Tuesday from add-in card retailers.