FireEye and Google have dismantled part of a mobile malware operation that stole online banking credentials from Android users via a malicious and stealthy app posing as Google Play.

The malicious Android app has infected at least 200 victims in the past 30 days, and appears to be targeting Korean-speaking victims. So far, only three of fifty-one antivirus programs can detect the malware, which has a Korean-language user interface, according to FireEye. It's tough for AV to spot because the malware is encrypted behind the app's user interface.

The app uses an icon that looks like Google Play's icon, and sits on the mobile device home screen as an attempt to fool or confuse the user into clicking on it rather than on Google Play. Once it's clicked on and activated, it steals the user's text messages, signature certificates, and online banking passwords from the device.

One of the more confounding features of the app -- called Google App Stoy -- is that its "uninstall" function doesn't actually remove the app. Even if the user kills the app services in the back-end, they restart when the Android device is restarted. 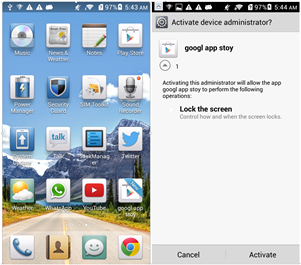 "It disguises itself and evades detection better than most malware apps pretending to be legitimate ones by preventing users from removing it and encrypting and compressing the real malware until after the app is downloaded and opened," Jinjian Zhai, a mobile security researcher with FireEye who has analyzed the malware, says in an email interview. "Furthermore, it steals SMS, certificate, and bank account information using well-encrypted Gmail SSL protocol, allowing it to further evade detection."

Zhai says FireEye enlisted the help of Google to take down the attackers' Gmail accounts, where they were sending the stolen information from the victims' phones. "Gmail is using the SSL protocol, which can help hackers evade the traditional network detection," Zhai says.

But even with the attackers' Gmail accounts now taken down, the operation could easily retrench, he says. "We can only work with Google to stop the hackers' Gmail. But they still have HTTP servers online. They can also easily change the Gmail account to publish new malware," he says.

[UPDATED 6/19/2014:] This isn't the first time the malware has been spotted, however. Jeremy Linden, senior security product manager at mobile security firm Lookout Security says this malware has been circulating since late 2013. Lookout calls it PlayBanker, but it's also known as FakeKRB or FakeKRBank. "Banking malware has become quite advanced in Korea due to the prevalence of mobile banking in that region. There are several large prominent families that have been extensively covered in the Android malware world. This variant is very similar to previous variants of PlayBanker in its functionality, with the major change being in the obfuscation method. That is, the app hides the malicious code in asset files," Linden says.

That obfuscation has been in use in otehr Android malware variants, he says. "Lookout first saw this approach used in April 2012 when we identified new variants of Legacy Native that used a very similar method to conceal the malicious payload in an otherwise-functional image file. It is clear that the significant potential for financial gain will continue to motivate malware developers in Korea and elsewhere to try new techniques to conceal their activities in the future," he says.

To kill the infection, victims should deactivate the app in the Device Administrator settings and then uninstall it, he says.

Meanwhile, just how victims initially become infected with the new malicious Google Play app is unclear. FireEye's Zhai says his firm received the sample from one of its customers, so didn't get any intelligence on the download lure. "However, the actual infection occurs after the app is downloaded and initially opened, which, when disguised as the official Google Play app, is an easy trick for a user to fall for," he says.

Even having two Google Play-looking icons on a screen can fool a busy or distracted user. "Sometimes the icons are not on the same page," which would make it even more likely the malicious one would be chosen, he says.

The attackers use a dynamic DNS server with SSL-enabled Gmail to gather the stolen information, and change their HTTP servers regularly.

"We have only found evidence in the last 30 days on about 200 victims. The older evidence has been removed by the hacker," he says.

The full technical analysis by FireEye is here.