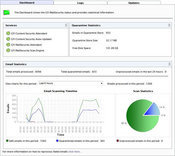 Enhancements address two key attack vectors, according to Nicholas Sciberras, product manager, GFI, which are, "the most recent malware for which definitions have not been released and links in emails that point to malware."

GFI MailSecurity 2011 uses Norman AV's Sandbox technology, which runs suspect malware in attachments, and analyzes the code activity, within a sandbox. This identifies, stops and isolates new and previously unknown malicious code that is in an attachment, "before it can damage computer networks or compromise data," according to the company.

GFI has improved checking of email attachments, including the ability to block attachments that exceed a specified size or are suspicious, while letting the rest of the message be delivered. GFI MailSecurity can now also do full scans of all internal email messages, using all of the product's various filters.

GFI MailSecurity runs on Windows Server 2008 or 2003 and requires an email server such as Microsoft Exchange. Pricing starts at $160 dollars for 10 mailboxes for the first year, and $102 for subsequent years, with volume discounts.