On the eve of the 2018 US election, Carbon Black released its quarterly threat report, which found 20 voter databases for sale on the Dark Web, including ones that contain information on voters in Florida, New York, Colorado and Connecticut.

Just as early voting in the US midterms is well underway in several states, a study found 20 different voter databases for sale on the Dark Web, including ones in swing states such as Florida, Pennsylvania and North Carolina.

All told, these 20 databases contain information on some 81 million voters, including personal data such as full names, current or previous addresses, genders, phone numbers and citizenship status, according to endpoint security firm Carbon Black, which released its Quarterly Incident Response Threat Report on October 30.

The report's results are compiled from data from 37 of Carbon Black's incident response partners.

There is enough personal information in these compromised databases to help those who want to target "election-related campaign materials to their desired audience, among other influential activities," according to the report. Also, the report found that "thousands" of Instagram followers, Facebook likes, YouTube views and Twitter retweets are available to those looking to influence voters during the midterms for a small amount of cryptocurrency. (See Twitter Cracks Down on Fake Accounts & Hacked Data Before US Election.) 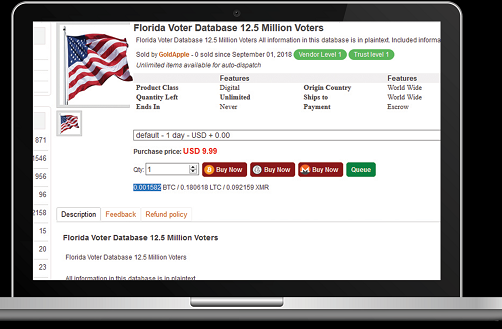 There are also freelance hackers advertising their abilities on the Dark Web, and who are offering any number of services from starting distributed denial of service (DDoS) attacks to renting out botnets.

There are over 12 million voter IDs in the Florida databases alone. The Sunshine State is considered one of the largest swing states in the country, and this year it is hosting competitive races for governor, US Senate and several Congressional seats.

However, the biggest prize appears to be New York. Carbon Black researchers found 15 million voter IDs in the compromised database. Other states with significant voter records exposed include New Jersey, Connecticut and Colorado.

"Because of the Dark Web, they have access to complex tools and compromised infrastructures, including voter databases," Tom Kellermann, the chief cybersecurity officer for Carbon Black and one of the report's authors, wrote in a statement. "This allows attackers to exploit new security vulnerabilities and operate at a higher level of sophistication than before."

Also, Carbon Black polled its various security partners as part of this quarterly report and found that 68% of those surveyed believe that a cyberattack will mar this year's midterm elections.

In addition to its look at the US elections, the Carbon Black survey found that 32% of respondents in its partner survey reported witnessing a so-called "destructive attack" in the last three months. These are usually carried out by nation-states, and examples include North Korea and Iran conducting operations to wipe machines suspected of being forensically analyzed by international law enforcement.

Of the 113 incidents that Carbon Black researchers scrutinized, 41% of those originated in either China or Russia. (See Russian & Chinese Hacking Forums Have Distinct Characteristics .)