SEARCH
A minimum of 3 characters are required to be typed in the search bar in order to perform a search.
Announcements
Event
Emerging Cybersecurity Technologies: What You Need to Know - A Dark Reading March 23 Virtual Event | <GET YOUR PASS>
Report
Black Hat USA 2022 Attendee Report | Supply Chain & Cloud Security Risks Are Top of Mind | <READ IT NOW>
PreviousNext
Database Security
2 MIN READ
News 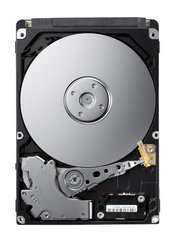 The high-capacity drive features two 500-GB platters and is 0.37 inches high, allowing it to fit easily into the small storage bays in laptops.

Samsung says the high density of the drive was achieved through advanced format technology (AFT), which raises the data storage density per unit area and enables efficient data storage. Samsung reduced the number of components such as disks and heads, which contributes approximately 7% increase in operation speeds and 8% decline in power demand than its previous drives.

The drive operates at 3 gigabits per second SATA interface, provides an 8-MB buffer memory, and has minimal noise levels and shock resistance.

Spinpoint M8 is currently in mass production and available worldwide with the 1-TB drive that sells for $129.

Many high-end laptops today come with hard-drive capacity of up to 750 GB. Apple's MacBook Pros have 750 GB of storage and HP offers 750 GB of storage per slot in its Envy laptops . Samsung's rival in the HDD space, Western Digital, introduced a 1-TB hard drive for laptops in 2009.

The demand for storage space is increasing, for both consumers and the enterprise. IDC reported that year-over-year revenue growth for disk storage systems was 13.2%, totaling just under $5.6 billion in the first quarter of 2011. The total disk storage systems capacity shipped was 4,956 petabytes, a growth of 46.3% year over year.

The growth is being driven in large part by the increasing creation of digital information, in particular the next-generation of "fixed" digital content like videos and images, according to IDC.

As the volume of corporate data continues to grow, IT pros keep investing in new storage usage technologies. Compression still ranks No. 1, according to InformationWeek Analytics' 2010 Data Deduplication Survey, though respondents rely increasingly on dedupe, as well as thin provisioning and MAID. Download it here (registration required).