Google has a new hardware partner in Lenovo, whose ThinkPad X131e Chromebook will be available next month equipped with Google's browser-based operating system and reinforced edges for durability.
Thomas Claburn
Editor at Large, Enterprise Mobility
January 17, 2013

New Chromebook: A Visual Tour
(click image for larger view and for slideshow)
Google and Lenovo on Thursday announced a rugged ThinkPad Chromebook for schools, one market where Google's Chrome OS has been well received.

The ThinkPad X131e Chromebook, available next month, runs Google's browser-based operating system. It's designed to make life easier for academic IT administrators through its immunity to most malware, its automated updates, and the fact that users can't download and install native software applications that undermine device security.

It is armored against abuse, with a rubber bumper around the top and reinforced corners to protect against accidental drops. The hinges are designed to endure being opened and closed 50,000 times -- given a 180-day school year, you'd have to open and close your ThinkPad Chromebook more than 55 times per day on average over five years to exceed design parameters.

"With the rugged features we added to the X131e, we've seen reduced failure rates in the field," said Jerry Paradise, executive director of product marketing for the ThinkPad Product Group, in a statement. "This is a huge benefit to schools and students."

Lenovo is a new hardware partner for Google, which has been working with Acer and Samsung to produce Chromebooks. According to Caesar Sengupta, director of product management at Google, over 1,000 schools are using Chromebooks.

In October, Samsung updated its Chromebook line with a $249 ARM-based model. The following month, Acer introduced its Intel-based C7 Chromebook for $199. The Lenovo ThinkPad X131e Chromebook also relies on an Intel Celeron chip and will be available starting on Feb. 26 for $429 with volume bid pricing. Google charges an additional $30 for a one-time management and support package. 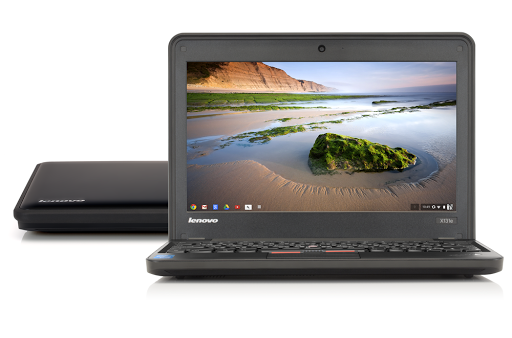 Google has not released data about Chromebook sales since it first began selling the devices in June 2011. Adoption initially was slow: In November 2011, Taiwan-based Digitimes reported that Acer had sold only 5,000 units of its Cromia 700 during its first month on the market and that Samsung had sold even fewer.

However, Samsung's third-generation ARM-based Chromebook appears to be doing better. According to Amazon.com figures, the Samsung Chromebook is presently the top-selling laptop, a position it has held for 91 of the past 100 days. A person familiar with Samsung Chromebook sales who asked not to be named insists four-quarter sales were very good.

As far as we can tell at InformationWeek, Chrome OS usage hasn't grown significantly since May 2012. Chrome OS accounted for 0.048% of visitors to our website in May and 0.041% in December, based on the browser user agent strings that could be identified. However, it should be said that if Chromebook usage is growing among students, that might not be reflected in our visitor statistics. 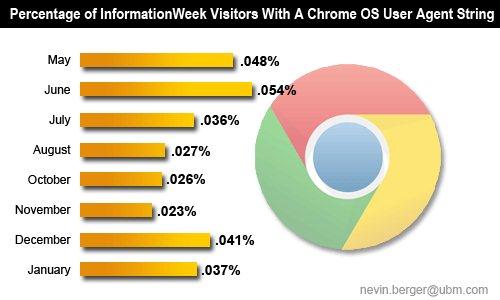