It took thousands of unnecessary traffic fatalities to create an environment for radical transformation of the auto industry. What will it take for a similar change to occur in data security?

By every metric, driving an automobile is far safer today than it was in 1965, due to a combination of factors including government regulations and legislation, consumer awareness, and technology advances. The catalyst for all of this was one man: Ralph Nader.

Prior to 1965, car manufacturers had no real motivation to make safe cars because the cost of doing so did not justify the business benefits. But then Ralph Nader published Unsafe at Any Speed, a critique of the safety record of American automobile manufacturers. His advocacy injected the traffic fatality epidemic into the headlines, and a nation changed.

Congress unanimously passed the 1966 National Traffic and Motor Vehicle Safety Act and established the National Highway Traffic Safety Administration (NHTSA). Manufacturers responded by putting seatbelts, headrests, and other mandated equipment in their cars, and some started making safety a competitive differentiator. And consumers… well, they never really got the memo. Many (if not most) still didn’t use seatbelts, even though they knew the risks. It took subsequent legislation at the state level in the 1980s to enforce seatbelt use among drivers.

What does this have to do with cyber security? Well, the current data breach epidemic feeds off a delicious broth of consumer apathy, corporate incrementalism, and flawed federal regulations -- exactly the conditions that existed in 1965 with automobiles. Clearly, things need to change if we are to curb the data breach epidemic… but who will be cyber security’s Ralph Nader? 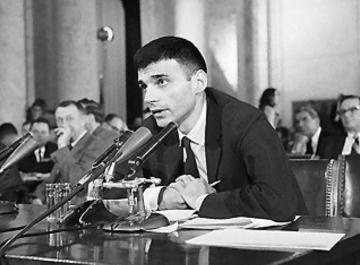 Who will be the security industry's Cyber Ralph?

With automobiles, Ralph Nader exposed a hidden crisis and called on government to change the rules of the game for manufacturers. This resulted in rapid, comprehensive legislation that required manufacturers to design safety equipment into their automobiles. These requirements were not an option: If you didn’t meet them, you could not sell cars in the US. Smart companies used this new focus on highway safety to their advantage.

Despite today’s fire-and-brimstone headlines about data breaches, the problem with cyber security is that nobody is feeling the pain of the problem. Consumers know their credit cards will be replaced and they will not be responsible for financial losses. Breached companies know their stock prices will bounce right back and consumers will continue shopping at their stores, and at worst they may have to throw an executive under the bus to meet the bar for “we’ve done something about this.” And government regulations speak for themselves: They simply are not a prescription for security, and at this point, breach disclosure requirements do more to breed public apathy than outrage.

Some themes for Cyber Ralph to consider include:

Make citizens aware of their entire risk exposure. They may not care about having passwords, account numbers, or credit card numbers compromised, but they likely would care about their healthcare records, tax returns, or travel plans being stolen and used for fraud, blackmail, or burglary. And they probably would care if they knew that this information may already be compromised -- the breaches just haven’t been discovered yet. The need for seatbelt laws demonstrates that consumers likely will not change their behavior based on this knowledge, but it will create a political environment where elected officials will want to do more to protect their constituents.

Make breach disclosure laws more intelligent. Not all breaches are alike, and yet reach disclosure laws treat them that way. A breach of customer data that cannot be used to harm those customers is different from a breach of unencrypted Social Security numbers. And yet, current regulations do not make this distinction, and the media simply fixate on the “number of records stolen,” not the potential damage that could be done with what was stolen. (The Breach Level Index is an interesting approach to shedding light on this problem.) As a result, all breaches are treated the same, and consumers have stopped caring because they are never materially affected by the “8 billion records stolen” headlines.

Adopt modern, practical technology. The most obvious example of this is chip-and-PIN credit cards. Europe has used them for years and also adopted complementary technologies like wireless point-of-sale in restaurants to improve credit card security. (Meanwhile, we in the US continue to hand our cards to strangers.) President Obama’s recent executive order promoting the adoption of chip-and-PIN is a promising start, but there really is no reason the US should lag so far behind its overseas peers in adopting sensible technology and processes.

Create an NHTSA for cyber security. Automobile safety improved only after the establishment of the NHTSA, an agency with authority to mandate safety standards nationwide. Cyber security needs the same type of organization. Implementing national standards will be good for consumers and businesses, because it will eliminate the complexity and variability in today’s state-level standards. This agency should have authority to implement standards across all areas of risk, including credit cards. (Chip-and-PIN would likely already be deployed in the US were this type of organization in place.)

Do away with “shades of gray” penalties. The National Traffic and Motor Vehicle Safety Act made things very simple for automobile manufacturers: Conform to national safety standards for automobiles, or don’t sell cars in the US. The “NHTSA for Cyber Security” should have a similar approach. Once we have effectively categorized breaches, we can separate out “secure” breaches (where the information stolen cannot be used to foment damage) from insecure ones. In cases where companies have done what they should to protect customer data (according to national standards), they can continue doing business unimpeded. Those that have not conformed to standards and experienced an insecure breach will have a grace period to bring themselves up to standards before they must cease operations.

This might seem Draconian -- except the automotive industry experience shows us it creates a level playing field, and when we reduce things to a simple binary situation (you’re either in business or you’re not), all companies will choose to conform.

The tragedy of the automobile industry is that it took thousands of unnecessary traffic fatalities to create an environment where Ralph Nader could bring about radical change. One hopes that we do not need to reach a similar state of disaster in the data breach epidemic to spur similar change. Will we act now? Or do we have to wait until millions of us are being bribed, defrauded, burgled, or worse?