Part 1 of a two-part series about securing machine learning.

Every decade or so, we get an opportunity to build security in as a new field blossoms into the world. Mobile security provided one such opportunity about a decade ago. Though security people have been known to complain about the state of mobile phone security compared with, say, Windows 95, that's like comparing day to night.

Fast forward to today. One of the most important technical developments we're currently experiencing in hyper-real time is the "AI Renaissance." AI and, in particular, machine learning (ML) have been around for decades, but a resurgence in ML technology driven by incredible modern computational power and unimaginably large collections of well-organized data has even the most skeptical greybeards impressed.

Of course, security has an important role to play in ML (not using ML for security, mind you, but rather securing ML technology itself). In this two-part series, I'll explore ML security through the lens of building security in. We'll start with a quick refresher on software security. 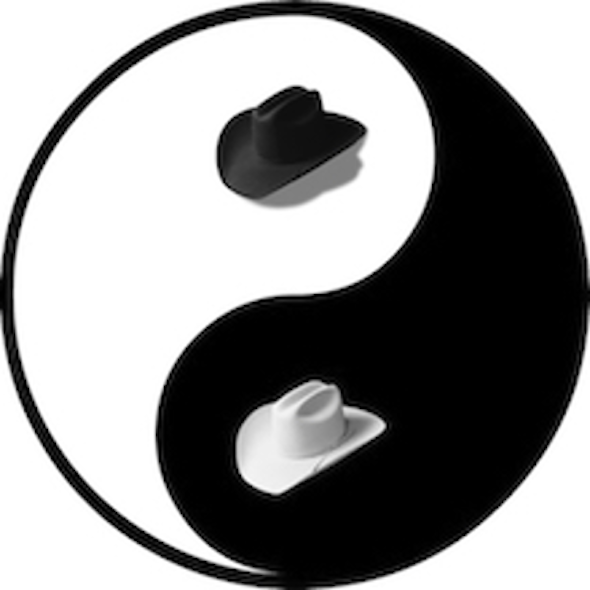 My yin/yang cowboy hats logo above is based on the understanding that good security blends offense and defense in an inextricable balance.

In the distant past, I presented the software security touchpoints in order from left to right. Although that works well, a better pedagogical approach is to order the touchpoints by their natural utility and present them in some sort of ranking. Some touchpoints are by their very nature more powerful than others, and the most powerful ones should be adopted first.

Here are the touchpoints, in what I consider the best order of effectiveness:

1. Code review: Reviewing source code with an automated tool like Coverity, Fortify, or SpotBugs is a great way to carry out this touchpoint. This touchpoint finds (and hopefully fixes) security bugs.

3. Penetration testing: Dynamically probing a running system for security problems is an important activity but often happens after the fact, making fixes that are much more difficult and costly. Note that pen testing should definitely not be the first and only touchpoint you employ.

5. Abuse cases: Many projects build use cases to understand how a system is meant to work. Abuse cases help determine what a system will do when it is under attack. Thinking about misuse before it happens is very powerful.

7. Security operations: Even a system that is designed for security, properly pen tested, and debugged during development will be subject to attack. Keeping an eye on a running system (and making that task easier) is part of security ops.

In the field, the touchpoints have evolved over time into well-understood practices (some better understood and practiced than others). Many aspects of the touchpoints can, for example, be found in the 119 activities defined and measured by the BSIMM.

When a new technology wave sweeps over the security discipline - such as mobile code security, IoT security, or ML security - one important exercise is to think about how the seven touchpoints can be applied in order to make security progress.

When it comes to many technologies, source-code analysis is the easiest security touchpoint to apply first. Why that is the case should be obvious: Regardless of the process you may have used to come up with your code, your code can be subjected to static analysis. That is, just about every software project has code. Well, to a point: Static analysis of a dynamic node.js assembly may not be possible depending on when, where, and how the assembly is put together. In fact, the move to dynamic languages is having a deep impact on the base effectiveness of code review using a static analysis tool.

Likewise, a DevOps approach elevates the importance of security operations (touchpoint 7), which is now defined in code itself. Containers are code, and container configuration is code. Container orchestration is code, too! So securing a system by design obviously must include operational aspects that may have been left to the IT guys in the past.

All details aside, there is a basic fundamental agreement that the software security touchpoints have a critical role to play in securing software (a field sometimes called application security).

In part two of this article, we'll explore these touchpoints and the very idea of how building in security apply to ML.

Learn from industry experts in a setting that is conducive to interaction and conversation about how to prepare for that "really bad day" in cybersecurity. Click for more information and to register.
Gary McGraw is co-founder of the Berryville Institute of Machine Learning. He is a globally recognized authority on software security and the author of eight best selling books on this topic. His titles include Software Security, Exploiting Software, Building Secure Software, ... View Full Bio
Comment  |
Email This  |
Print  |
RSS
More Insights
Webcasts
How To Increase IT Financial Efficiency During Uncertain Times
Using Zero Trust to Protect Remote and Home Workers
More Webcasts
White Papers
Why You Need Self-Serve in the Hybrid Workplace
Understanding the Zero Trust Approach
More White Papers
Reports
Overcoming Roadblocks to Digital Transformation with SASE
How Machine Learning, AI & Deep Learning Improve Cybersecurity
More Reports
Copyright © 2022 UBM Electronics, A UBM company, All rights reserved. Privacy Policy | Terms of Service