What is the 'Goldilocks Zone' when it comes to encryption? Security Now community members speak out in our latest poll.

If the goal is to keep data out of unauthorized hands, should organizations simply encrypt every bit they possess?

That's the essence of the question we posed in the most recent Security Now poll. Is it possible to miss encrypting important data? Or is it possible to encrypt too much? Executives responding to our poll are split, but only in the degree to which data should be encrypted. It's tough to find anyone in the community here who thinks encryption itself is a waste of time.

As always, we recognize the limitations of our methods. We understand the polls we conduct on our pages aren't going to fuel academic research. That's why it's important we properly label the conclusions. I think it's accurate to call them a Highly Opinionated, Not Especially Scientific Tally -- or, as I like to think of them: HONEST results. 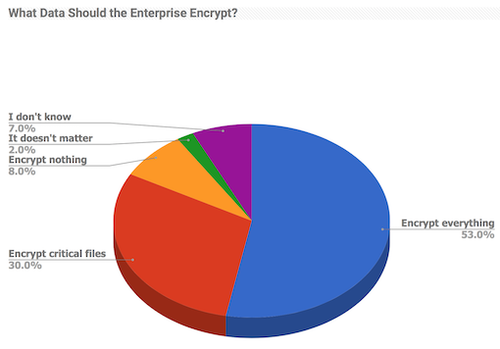 More than half of those responding said encrypting everything is the way to go. Why take a chance, right? But community member (and Security Now contributing writer) Joe Stanganelli sounded a cautionary note in the comments when he wrote, "I put 'Encrypt everything,' but there are compelling arguments to be made against encrypting everything -- particularly in highly regulated industries where encryption can hamper accessibility to the point of potentially resulting in questionable compliance."

In addition to regulatory compliance questions there are undeniable costs in performance, resource utilization and software or service licensing when you encrypt everything. It can be the safest option but security has always been a matter of cost versus reward and many organizations may well find the scales tipped in the wrong direction when it comes to encrypting everything inside the perimeter.

Another 30% said encryption is the right answer, but need only be applied to an organization's most critical data. This is a widely used standard though it does carry with it an extra cost: An organization must go through its data to determine what is actually important. While it sounds like an exercise that should fall well within the bounds of "obvious," there can be a great deal of nuance and legal or regulatory judgement that teams must apply before encryption can take place.

Of course, a handful of folks decided that throwing up their hands in frustration and defeat was the proper response. It's certainly easy to understand why they might reach such a conclusion -- encryption is a complex topic from both policy-making and technology points of view. Nevertheless, the growing number of public incidents indicates it's a topic that each organization must deal with -- and deal with sooner, rather than later.

Keep an eye out for the next Security Now poll. It's going to deal with a question of an international nature -- one that may well have you questioning who deserves to be on your lists of friends and enemies.