A survey finds that employees are more likely to bypass good security practices when they travel during the holiday season, but still log onto the corporate network to work.

As the 2018 holiday season begins this week, enterprises must once again consider how it will affect the work its employees will perform.

Most employees will be traveling at some point during the next six or so weeks, and because of the rise in web interconnectivity, many will be doing work-related tasks as well. It seems a good time to consider how aware employees are of the security risks they may be exposing their employers to as they travel.

Security firm ObserveIT thought this was a good idea as well. The company surveyed 1,000 US-based employees, ages 18 to 65-plus, on their digital habits when it comes to holiday travel to see what was going on.

Not surprisingly, 55.3% of respondents anticipated that there would be a need to bring a work device with them while they traveled during the holiday season. This exposes that device to being stolen, damaged or broken through its use in uncontrolled situations. 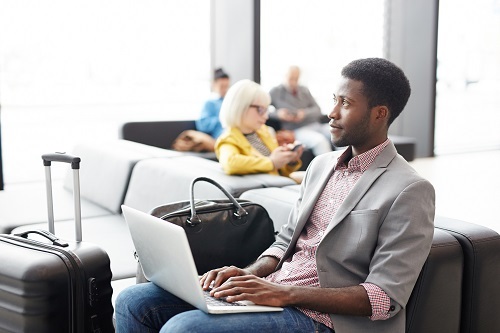 ObserveIT also thought that having such a device out in the wild might make the employee self-identify to hackers as a target of interest. While that is possible, the large number of similarly equipped users that will also be out there during this period may act as a protective shield.

The firm also found that 77% of employees would use free or unlocked WiFi while using a work computer or phone during travel. The security problems of such systems have been well documented, and can pose a risk to the business files on the work device.

Indeed, this is highlighted by the 62% of respondents who report that beyond the simple usage of work devices, they would also be handling work email or accessing work files through an unsecured WiFi connection. (See Wi-Fi Alliance: WPA3 Standard Will Improve WiFi Security, Encryption.)

This exposes company data to the sort of problems typically found in unsecured network connections, such as man-in-the-middle (MiM) attacks. It seems that having the work device available during travel increases the chance that it will be used in an unsafe situation.

Some employees recognize the problem, however. Around 55% report that they would use a company-vetted secure VPN when they communicated with the work environment for file access and other tasks that could benefit from a secure connection.

But, all is not Skittles and beer here.

Of those surveyed, 21% admitted that they leave their work devices unattended while traveling or working remotely. This would expose them to such attacks as "evil maid," where the maid in a hotel room takes physical control of the device for misuse. Not to mention the theft potential that follows any unattended device. (See After Spectre & Meltdown, Intel Faces an 'Evil Maid' Problem.)

Only about half of the employees surveyed -- 51.2% -- were aware of their company's cybersecurity guidelines that were in place for using work devices while outside the office.

ObserveIT says the key takeaways from their survey include:

All those points seem to be valid, and should serve as an alarm to the enterprise about the additional security challenges they face during the holiday season.