The number of reported data breaches fell more than 50% in the first quarter of this year compared to the same time in 2017, as attackers focused more on cryptomining and cryptojacking schemes.

The number of reported data breaches fell by more than 50% when comparing the first quarter of this year to the same time period in 2017, as cybercriminals switched from ransomware to more lucrative cryptomining and cryptojacking schemes, a new industry survey released Tuesday revealed.

Most of the records exposed this year are related to a single incident that happened in India, according to Risk Based Security, which released its first-quarter data breach report on May 8.

While the number of data breaches fell 52% year-over-year, attackers remained busy as the number of cryptomining and crypojacking incidents increased as cybercriminals turned their attention to the volatile cryptocurrency market, where speculators and investors have pushed prices upward over the last six months. 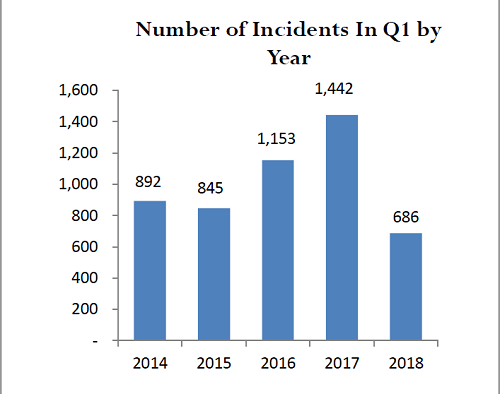 The Risk Based Security report reflects other industry surveys that show as the price of Bitcoin and other cryptocurrencies began to rise at the end of 2017, cybercriminals turned away from ransomware as cryptomining schemes became much more lucrative. (See Malwarebytes: Cryptomining Surges as Ransomware Declines.)

While trends in security and cybercrime are hard to predict, Inga Goddijn, the executive vice president of Risk Based Security, notes that these cryptomining and cryptojacking incidents are unlikely to stop anytime soon. (See Android Crypto Mining Attacks Go for Monero .)

"For financially motivated actors, it appears to be a much more reliable method of monetizing their activity," Goddijn wrote an email to Security Now, adding:

Ransomware can be very effective -- we wouldn't have seen the level of activity in 2017 that we did if it wasn't -- but for ransomware to work as a money-making scheme the impacted organization has to pay the extortion demand. Stealing resources to mine for currency can produce more consistent returns. That's the beauty of these schemes -- they don't rely on people making the decision to pay. The malware starts to produce results once it's successfully launched in the victim's system. As long as crypto mining activities produce income, I expect the activity will be with us even if currency valuations decline somewhat.

These cryptomining incidents are now so widespread, Google took the unusual step of announcing that it would ban all cryptomining extensions from its Chrome store by the end of the year. (See Google Web Store Bans Cryptomining Extensions.)

Breaches still a factor
Despite the shift from stealing data to cryptomining schemes, data breaches remain a significant concern for many enterprises. The report finds that more than 50% of the reported incidents in the first quarter involved the business sector, with government (14.4%), medical (10.2%) and education (7%) affected during this time as well.

The report notes that one incident, a data breach involving India's Aadhaar database, which the government uses to track identification and biometric documents of citizens, accounted for 81% of the 1.4 billion record exposed during the quarter.

Also of interest in the report is that the number of data breaches involving fraud jumped, with 1.27 billion records exposed by this method during the quarter. (Hacking remains the most common cause of a data breaches, with nearly 39% of incidents related to this type of attack.)

Once again, this is due to one specific case: The Facebook and Cambridge Analytica incident first reported by the UK press about two months ago. (See Facebook Privacy Policy Is Under Investigation by FTC.)

In her email, Goddijn noted that while the Facebook and Cambridge Analytica incident does not reflect a typical data breach, the fallout and security questions it raised should serve as a warning sign to enterprises everywhere.

"The event had all of the classic fallout we'd expect to see from a security breach," Goddijin wrote. "Lawsuits were filed, regulatory investigations were launched, executives were summoned to testify at governmental hearings and the public backlash was immediate. What's more, Facebook's response was very similar with what we'd expect to see with a major security breach, announcing a sweeping audit of third-party application providers and even a data abuse bounty program to complement their existing bug bounty program. As data collection and use issues start to look more and more like data security problems, we should expect the security industry to be tapped to provide solutions."

More Informa Tech Live Events
Developing and Testing an Effective Breach Response PlanHow to Protect Your Legacy Software ApplicationsCybersecurity: What You Don't Know Can Hurt You

Developing and Testing an Effective Breach Response PlanWhether or not a data breach is a disaster for the organization depends on the security team's response and that is based on how the team developed a breach response plan beforehand and if it was thoroughly tested. Inside this report, experts share how to: -understand the technical environment, -determine what types of incidents would trigger the plan, -know which stakeholders need to be notified and how to do so, -develop steps to contain the breach, collect evidence, and initiate recovery.
Download This Issue!