The hat you wear as a security researcher matters, say those who took the latest SecurityNow.com poll. And the most effective hat color is black.

Who do you trust to find security issues? What kind of researcher is best at sniffing out vulnerabilities and gaps in security? Do you put your faith in the good guys working for security firms? Do the bad guys always come out on top when finding trouble? Or is the best solution someone who straddles the sometimes-fuzzy line between the two?

That's the question we put to the community here at SecurityNow, and the response was... interesting. It turns out that more than one-third of our readers, 35.1% to be precise, feel that "black hats" have done the most to advance the cause of security in our industry.

Some might feel that this is akin to saying that the Visigoths did the most to advance the cause of Roman civilization, but in a way it makes sense: Black hat hackers devote most of their time to finding vulnerabilities and tend to be rather good at their jobs. 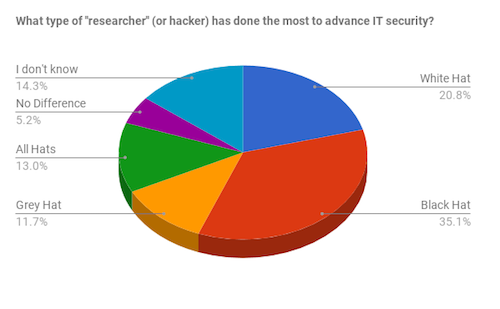 The group getting the next highest number of responses was white hat hackers, given credit for the most advances by one fifth of those responding to the poll. These legitimate professional researchers, often employed by the companies that provide security hardware and software, are paid to do the same sort of work that black hats do, only without actually committing crimes as the point of the whole exercise.

Want to learn more about how LTE-A Pro and Gigabit LTE will impact the 5G market? Join us in San Francisco for LTE Advanced Pro and Gigabit LTE: The Path to 5G event -- a free breakfast collocated at Mobile World Congress Americas with a keynote address by Sprint's COO Günther Ottendorfer.

The group getting the least respect was the cadre known as "grey hats," that is, those who use techniques that might be of questionable legality to do research that tends to be used for legitimate purposes. We don't know why these researchers who try to walk on both sides of the street get less respect, but they do; perhaps they would be better served by committing to one side or the other of the morality (and legality) fence.

What do you think? Have the criminal hackers actually performed a service by exposing security vulnerabilities? Should we be giving more credit to the legitimate, white hat researchers? Let us know, and get ready: Another SecurityNow.com poll question is coming soon!