Google doesn't recognize the browser behavior as a security issue.

The way that Google Chrome allows web apps to access microphones in computers is being described by a web developer as a security flaw.

Tal Ater, a programmer based in Israel, on Tuesday published details about the issue on his website. He says he has been working with Google engineers since first reporting the issue on Sept. 13, 2013.

Google doesn't recognize the issue, demonstrated in this YouTube video, as a valid exploit, and insists Chrome is safe and performing as expected.

Chrome provides access to a computer's microphone (if one exists) on the host device through the Web Speech API. After seeking permission, Google's browser allows users to click on the microphone icon in the Google Search input box to listen for spoken words that can be recognized by the company's speech-to-text algorithms and turned into text-based search queries.

Two months ago, Google also released a Chrome extension that allows "hotwording" -- having the host device listen constantly for a key phrase like "ok Google," in order to automatically interpret whatever words follow as a voice command.

But in pushing the boundaries of browser development, Google may have provided malicious hackers with an opportunity to spy on the unsuspecting, Ater claims.

Google's security team developed a fix to the identified vulnerabilities within two weeks, Ater says, but has been waiting for the W3C, the web standards body, to agree on the best approach to fix the flaw.

Google in an email statement put it another way: "The security of our users is a top priority, and this feature was designed with security and privacy in mind. We've re-investigated and still believe there is no immediate threat, since a user must first enable speech recognition for each site that requests it. The feature is in compliance with the current W3C standard, and we continue to work on improvements."

Ater explained in a previous email that Chrome does not comply with the W3C's unfinished specification for Web Speech, which states that code implementing the Web Speech API should "abort an active speech input session if the webpage lost input focus to another window or to another tab within the same user agent," in order to reduce the chance of allowing websites to record without the user's knowledge. 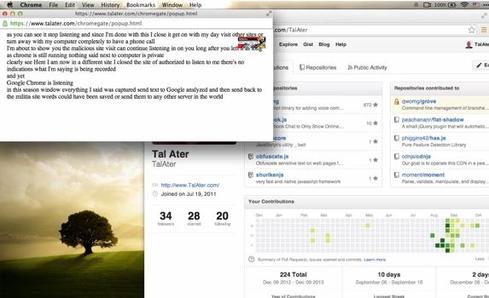 Tal Ater's YouTube video demonstrates what he says is a flaw in Chrome.

But that recommendation was struck from the specification last November. The Web Speech API errata calls for the deletion that very sentence. This appears to make the scenario depicted in Ater's video -- in which a hidden pop-under window continues recording surreptitiously after the user has granted recording permission and then navigated to another website -- acceptable, at least from a standards perspective.

"The problem is that the current implementation allows turning on speech recognition in a background window or tab that the user has never interacted with and may not be aware is there," Ater said. "Add to this the fact that there is no visual indication in pop-up windows for speech recognition being turned on, and you have a perfect combination of little bugs and issues coming together to create an exploit that is more than the sum of its parts."

Such behavior appears to allow Chrome to be turned into a covert listening device, but because Google has addressed some of these issues, it's not clear how easy abuse might be. Ater has posted sample exploit code in a Github repository.

"I think the severity of this exploit should be measured by how it can be used to create something which can affect a user's privacy, and not by the severity of each of its small parts," said Ater.

The Chromium team is working on at least one other microphone-related security issue.

None of this is entirely surprising. Microphones have represented a security vulnerability for more or less as long as they've been around, but they're even more of a potential threat in an era of mobile, network-connected devices. In 2008, security researchers identified a flaw in Adobe Flash that allowed webcams to be hijacked for surreptitious surveillance. A related Flash for Chrome vulnerability surfaced last year. Also last year, Cisco published a warning of an exploit that could turn one of its IP phones into a surreptitious listening device.

Back in the 1980s and for years after that, Lucasfilm's acoustics certification group THX ran thundering trailers in movie theaters that declared "The audience is listening." Today, the computers are listening, quietly but attentively.

Thomas Claburn is editor-at-large for InformationWeek. He has been writing about business and technology since 1996, for publications such as New Architect, PC Computing, InformationWeek, Salon, Wired, and Ziff Davis Smart Business. Before that, he worked in film and television. He's the author of a science fiction novel, Reflecting Fires, and his mobile game Blocfall Free is available for iOS, Android, and Kindle Fire.