The industry has been remarkably innovative in developing business models to extract money from the unwary.
Martin Lee
Technical Lead, Threat Research, Analysis & Communications, Cisco
October 03, 2013
The sustained drop in spam volumes since 2010 has coincided with a change in tactics. Anti-spam nonprofit Spamhaus says just 100 operations generate 80% of spam, and these specialists are moving away from indiscriminate, high-volume mailings and instead fine-tuning their campaigns. Spammers know, for instance, that users are less likely to open messages during the weekend, so they've reduced the volume of messages sent on Saturday and Sunday by 25% compared with the rest of the week. It's marketing 101 -- make messages timely and relevant to the audience, send them at the most opportune moment, improve click-through rates.

Meanwhile, spammers are counteracting anti-spam measures. Botnets can check if an individual member's IP address is blacklisted as a sender of spam and if so, assign a different task to that machine. They can spread a spam campaign across a wide range of IP addresses, so each address sends only a small number of emails, thus minimizing the chance of the spam being identified by the telltale sending of large volumes of messages from a single source.

And where once spammers had to hang around underground forums to gain access to those botnets, a shadow economy devoted to servicing the industry has sprung up. The advent of professional spammer services means that access to high-volume "bulletproof" email servers is only a search engine query away. The unique selling point of these companies is that they send email without the inconvenience of having services withdrawn over complaints about spam, and hence, serve customers for whom a takedown-resistant service is important. Such services are widely advertised, with transparent pricing plans and service levels. Spammers can even pay by credit card. These services operate without fear of legal reprisals -- and with a willingness to go on the attack.

In March, Spamhaus added the bulletproof hosting provider CyberBunker to its directory of suspect IP addresses; this list is widely used to block connections suspected of sending spam. Shortly after, a major distributed denial-of-service attack was launched against Spamhaus's systems. Using a list of poorly configured DNS servers, the attackers sent small DNS requests, spoofed to appear to originate from Spamhaus's IP addresses, seeking large amounts of DNS data. Think of an attacker using a small Post-it note to deliver a copy of the Yellow Pages to a victim's address. Ultimately, the attack failed, Spamhaus was able to continue its work, and two alleged perpetrators have been arrested and charged in relation to the crime. But such battles are expensive, and arrests are few and far between.

Meanwhile, spammers have become adept at hijacking breaking news as an effective method of engaging with users. In the aftermath of the Boston Marathon bombing on April 15, spammers launched two large-scale campaigns with fake news bulletins designed to prey on interest around the attack. Both sets of emails contained links to malicious websites that attempted to install malware. 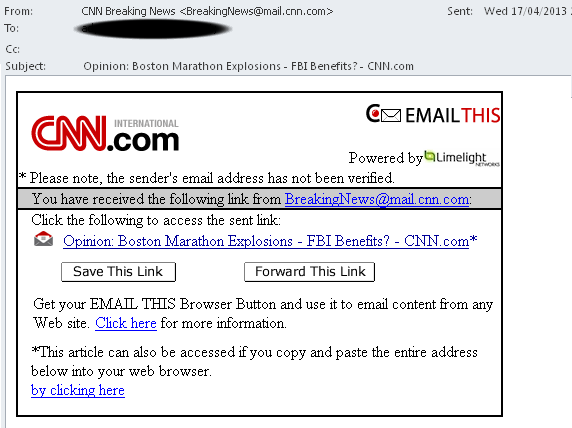 At its peak on April 17, Boston Marathon bombing-related spam comprised 40% of all spam messages delivered worldwide. This is unusual. Typically, spammers prefer to send spam in lower volumes to avoid triggering security alerts, but spammers are keen to make the most of a topic with broad interest but possibly a short lifespan.

When current news events aren't compelling enough, spammers are not beneath inventing their own news to entice users to open their messages. During the period of discussion regarding the possibility of international military action against Syria, spammers sent fake news updates announcing that bombings had already taken place. Again, these emails linked to malicious websites serving malware rather than the "full story." 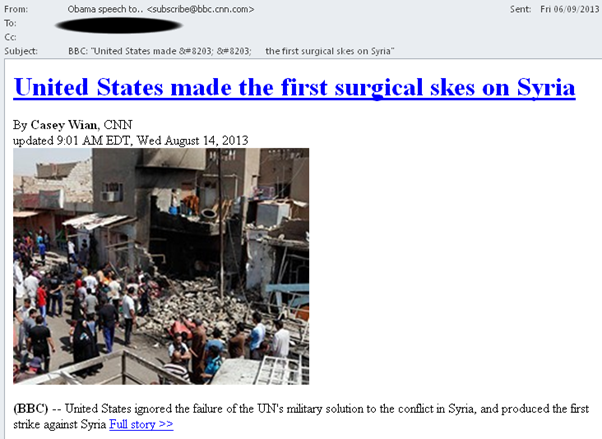 Teaching users not to click links in suspicious emails is a cornerstone of security training. However, even the most highly trained user will be tempted to open a message when faced with a convincing news report that is compelling and consistent with current events. Recipients are less likely to see emails that are relevant to their interests as suspicious, so make sure you regularly apprise employees of current spam tactics.

Still, as the spam industry professionalizes, expect deep analysis by spammers of the types of messages that users are likely to open and with which they're likely to interact. The less spam looks like spam, the more important it is to keep malicious messages from ever hitting user inboxes. When evaluating anti-spam options, look for an advanced threat intelligence network that can consider the context of a message, the reputation of the sender, the reputation of the sending IP address, and the nature of websites hosting any links within the email.

Plan for a few malicious messages being missed by anti-spam systems or accessed through other means, such as via personal webmail accounts. In these cases, the next defense is a Web scanning tool that blocks access to links that are actively being distributed in spam campaigns; even if a user has accessed a message, the device can prevent the link from being opened.

Blocking websites based on reputation is particularly useful to foil gangs that use shady hosting companies to spread malicious content, not only by email but also via social networking or other techniques. Obfuscated malware can be particularly difficult to detect using traditional signature-based antivirus techniques.

And remember that all this expensive technology is useless if the email is delivered to a junk mailbox, where someone can click on messages that look like legitimate email. If you don't have enough confidence in the false-positive rate of your anti-spam system to prevent users from having access to blocked spam email, reconsider your strategy.

One thing is for certain: Spammers aren't getting any dumber. The spam community, and the ecosystem that supports it, will continue to evolve in terms of range and professionalism. Spammers already convincingly spoof legitimate news sources; the next step must be to convincingly spoof messages from a user's employer, friends and family. Only by keeping these messages away from intended recipients can we hope to stop feeding the beast.