SEARCH
A minimum of 3 characters are required to be typed in the search bar in order to perform a search.
Announcements
Event
The Value Drivers of Attack Surface Management, Revealed | May 26 Webinar | <REGISTER NOW>
Event
Implementing and Using XDR to Improve Enterprise Cybersecurity | May 25 Webinar | <REGISTER NOW>
Event
HOW DATA BREACHES HAPPEN & WHAT TO DO WHEN THEY HAPPEN TO YOU | June 23 Virtual Event | <Get Your Pass>
PreviousNext
Vulnerabilities/Threats
7 min read
article

Security guru Mikko Hypponen talks malware evolution, factory-automation vulnerabilities, Space Invaders, and jamming to Justin Bieber
Kelly Jackson Higgins
Editor-in-Chief, Dark Reading
September 18, 2012
Mikko Hypponen's first job out of college was driving a forklift in an X-ray factory in Helsinki, stocking and loading equipment onto trucks for shipment. He later joined a start-up that ultimately became F-Secure Corp., and he has been there ever since.

Neither Hypponen nor F-Secure -- which was then known as Data Fellows -- at the time was specifically focused on information security. "I was employee No. 6, and I was the database developer for an application that had nothing to do with computer security," Hypponen says of his hiring in 1991. "At the time, the company was doing lots of different things in addition to security, doing customer development and training. This project was writing a database app for a local factory."

Hypponen scored his first security gig at F-Secure a year later when he was assigned to virus analysis, a job he got mainly because he had experience with low-level Assembler code. "At the time, I was one of the few guys who knew low-level coding because I had been writing applications on a Commodore 64. I wasn't drawn to malware analyzers and reverse-engineering," Hypponen says. (He still has his Commodore).

Today, the 42-year-old Hypponen is chief research officer at F-Secure and considered one of the world's foremost security gurus and visionaries. If anyone in this industry has experienced the evolution of malware firsthand, it's Hypponen. He has been in the trenches of studying the earliest malware like Brain and, more recently, the game-changing cyberweapon Stuxnet. Hypponen has collected malware samples like he collects vintage coin-operated video games. His team at F-Secure helped take down the Sobig.F worm and its infrastructure in 2003, and he was one of the first security researchers to alert users about the Sasser worm. 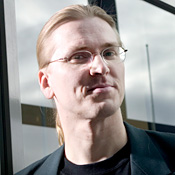 Mikko Hypponen
Hypponen, with his signature ponytail and wire-rimmed spectacles, is easily one of the most recognizable industry experts as well as one of the best-known: He has two TED talks under his belt, and has calmly tackled some of the more dangerous research into cybercriminals and even terrorists online.

Last year, Hypponen traveled to Lahore, Pakistan, to interview the writers of the very first computer virus, Brain. Hypponen's idea of making a pilgrimage to Pakistan for Brain came after an F-Secure brainstorming session about a social media campaign to raise awareness about malware to mark the 25th anniversary of Brain, which Hypponen had analyzed back in 1986. "[The social media campaign] sounded like the most boring thing in the world," Hypponen recalls. "So I had decided, what if I go and find the guys who wrote Brain?"

Hypponen was undaunted by physical security concerns about travel to Pakistan, even though there had been riots in Lahore three days prior to his scheduled arrival there in the wake of a CIA agent's shooting of two Pakistani citizens. Before he knew it, he was knocking on the door of the two brothers who had created Brain. It was the first time Brain authors Amjad Farooq Alvi and Basit Farooq Alvi -- still with their same company, Brain Telecommunications Ltd., the virus's namesake -- had sat down for a video interview about the experimental virus, which was spread via floppy-carrying human beings in 1986. Hypponen presented them with the 5-1/4-inch floppy disk containing Brain that he had once studied so closely and told them he was "bringing it back home."

"It turned out to be a lot of fun, and we were able to report many misconceptions about the legend of Brain," he says. "And we recorded it for the history books as well."

Hypponen has no plans right now for another historic virus trek, however. "I'm not going to Iran and knocking on doors to the nuclear facility about Stuxnet," he quips.

Brain was the first of a generation of relatively innocent floppy-disk viruses, he notes. Those mostly benign viruses are long gone: "The biggest change is in the enemy," Hypponen says of the malware evolution he has lived and breathed. "Early floppy-based viruses had no real motive at all -- they weren't trying to make money or send a message. [The creators] were doing it for fun, for the challenge, and just because they could."

Hypponen says malware writers today have the same motive: making money. But there's a misconception that they all necessarily make a lot of money. There's a hierarchy of workers, with some just making a few hundred dollars to $1,000 doing the dirty work of the more experienced online criminals who make the real money -- in the millions, he says. "They run servers for them or do repacking" or other tasks, he says.

People often ask him why he has stayed with the same company for so long. "For the field I work in, there really isn't any other company in Finland where I could use my skill," he says. And for a country of 5 million people, Finland has a relatively large computer security industry, says Hypponen, who's responsible for planning F-Secure's future research and predicting the types of attacks to come in the next year or two.

Not much rattles Hypponen, but he admits his biggest worry is the lousy state of security in factory automation. "It's quite remarkable that we haven't been able to move what we've been learning on traditional computing sites to automation gear," he says. Although there has been more awareness and some improvement, it takes a long time for those advances to trickle down to the factory floor, he says.

It's not just nuclear plants that are at risk, he says. "It could be a food-processing plant" that gets compromised and ultimately sickens consumers, he says.