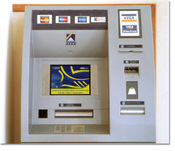 Want to make a cool $500,000 per month for you and your mules? Try card-skimming attacks.

Indeed, while Zeus-related exploits have lately been making headlines, "almost no focus has been given to a new type of flash attack that has hit several banks and payment processors I talked with over the last couple of weeks," said Avivah Litan, a VP and distinguished analyst at Gartner Research.

What's changing, however, is the scale and sophistication of such attacks. Rather than targeting a small group of stores, criminals may target chains of retailers and large numbers of stores, crossing state lines or geographical regions. Such an attack recently targeted Aldi stores in 11 Midwestern states.

The stolen card data is then compiled, condensed, and used to create fake ATM cards with PINs helpfully taped to the front. Next, at multiple locations across the country, money mules simultaneously make small withdrawals, using approximately five stolen cards in turn. Within 10 minutes, a gang can amass $100,000, said Litan. "Repeat this exercise a few times more over the course of the month. At the end of the month, the total heist can add up to $500,000.

One underlying issue is that many stolen credit card numbers don't appear to be going out of circulation. "One banker just told me that his bank is still seeing fraud on cards allegedly stolen during the Heartland Payment Systems breach," she said. For the record, the Heartland breach occurred in January 2009.

How can skimming attacks be stopped? "The only successful fraud mitigation strategy I've seen that works in practice today is that once the first round of fraud is discovered, an acquiring processor or a payment network tries to figure out the point-of-compromise for these cards," said Litan, then blocks those cards and issues new ones. While this approach can be costly, she says it's a far better alternative to seeing consumers' accounts drained.

Going forward, however, the best solution will be "stronger cardholder authentication," such as adding chip and PIN microchips to credit and debit cards, she said. While widely used in Europe, credit card issuers have yet to introduce similar security technology in the United States or Canada.