The majority of US workers fall short when it comes to strong knowledge of security and privacy best practices, potentially putting their companies at risk of a breach, according to a new report.

The 2017 State of Privacy and Security Awareness Report, which surveyed 1,012 US workers, found that 70% of employees lack a firm grasp of security and privacy. Overall, that's an improvement from last year, when the number was at 88%.

"I think things, in general, are getting better," says Tom Pendergast, chief strategist for security, privacy, and compliance for MediaPro, which conducted the study.

The survey results were drawn from 31 questions asked across eight categories of threat vectors. Survey participants were ranked as "risk," "novice," or "hero," depending on the number of incorrect answers they provided. 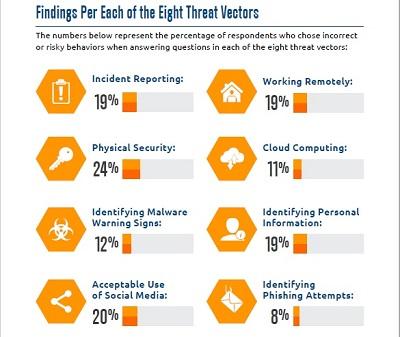 In physical security, over half of the “risky” respondents chose to hold the door open for a stranger, without first checking to see if the individual had the proper identification or access to a secured area, he explained. Additionally, 62.3% of “risky” respondents this year thought it was okay to use a public Wi-Fi network to access company information, which was up from 45% last year.

Acceptable social media use and physical security suffered in this latest MediaPro survey.

Respondents willing to take potentially risky actions on their social media accounts that posed a risk to their companies reached 20% this year, compared to 14% last year. When queried whether they would be willing to post information about their company's upcoming yet undisclosed product release information on their social media account, more than 20% of the survey respondents answered affirmatively this year, compared to 7.5% last year.

Pendergast says he wished he knew why security awareness around social media accounts declined this year.

In addition to social media, physical security also took a hit this year. The survey found that nearly a quarter of employees surveyed were willing to take potentially risky actions in favor of controlling access to their company's facility. For example, 20% of survey respondents indicated they would be willing to hold an office door open if someone asked to enter, even if they lacked proper identification.

The percentage of survey respondents who lacked a firm grasp on physical security grew to 24% this year, compared to 19% last year.

"This is one where everyone knows they need to lock the door to their home at the end of the day, but why not carry this attitude to work?" Pendergast says. "They're not protecting their company's front door and that is a little surprising."

Companies like Microsoft and Boeing, he says, have a corporate culture where employees feel comfortable asking strangers whether they work at the organization if their company badge is not visible.

"Phishing is always identified as the number one reason for data breaches and malware, but I think we can drive the 8% number lower with education," Pendergast says. "If there is one thing that is talked about again and again and year after year, [it] is phishing."