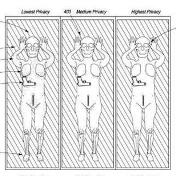 It's also got a highly sophisticated X-ray setup. Beams of higher and lower x-ray energies are chopped into a fan pattern by a rotating disk, the better to "enable differentiation between innocent and contraband materials."

In his second patent, Annis is reshuffling the scanner deck by from airport applications to medicine. Patent 7,620,150, of Nov. 2009, is entitled "X-ray backscatter system for imaging at shallow depths ."

From the description: "The invention relates to medical diagnostic systems, more particularly, to diagnostic instruments for detection of tumors of the skin."

The idea is to do it at lower power and with greater detail than conventional systems. More from the patent: "Current x-ray procedures for examining the region of the body just below the surface of the body utilize transmission x-ray systems. These systems must penetrate the entire width of the body that lies below the region of interest just below the skin lesion. In order to do this, the peak energy of the x-ray spectrum must be sufficiently high to penetrate the body and the x-ray exposure to the patient is correspondingly high. In addition, the contrast in observing small differences in the density in the soft tissue is not sufficiently great to make such an x-ray examination useful.

"It is important that the system be of low radiation exposure to the healthy tissue deep within the body. This is accomplished in the current invention by using backscattered x-rays that expose only a relatively small volume of the patient's body. The system is also compact and inexpensive, which is desirable given the large number of patients that must be served in doctor's offices."

A specific application noted by Annis is to check out suspicious regions of the breast, which have initially been identified during mammography.

Our fifth and final example is from L-3 Communications. The company didn't win the airport contract, but it is still very much a player in explosive detection, selling systems to the military. What we're looking at here is not an awarded patent, but rather patent application number 20100141502, which was filed this past June.

The application is entitled, "Contraband Screening System With Enhanced Privacy." The documentation shows that L-3 is pursuing the techniques for muting out raw-body images to focus instead on the bad stuff.

Here's the money quote: "The system preferably does not directly display images of a person formed from a mm wave camera scan. Doing so creates privacy concerns. Because the millimeter (mm) wave camera effectively "sees through" clothes, an image formed with the mm wave camera resembles a picture of a person taken without clothes. Thus, detecting contraband in a mm wave image but displaying an indication of the contraband in connection with a visible light image addresses potential privacy concerns as well as presenting the information in a format readily understandable to the human operator of the inspection system."