Customers can watch live video from up to four security cameras or receive email notifications when movement is detected.
Antone Gonsalves
Contributor
February 17, 2011 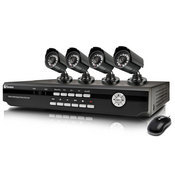 The DVR4-2600 kit, introduced Thursday, includes a digital video recorder with 500 GB of storage and four color cameras. The system can store up to 30 days of continuous video. More days are possible, if the customer uses the gear's motion-detecting technology that records only when movement is detected in the monitored area.

Once the applications are installed, the user types the DVR's IP address to make the connection over the smartphone's 3G network. In less than a minute, the user can see live video from all four cameras, according to the company.

Swann says its latest DVR is a "flagship product" for the company, which first showed off the system at the Consumer Electronics Show in Las Vegas, Nev., in January. "It brings together surveillance and phone connectivity and convenience as never before," Jeremy Stewart, VP of global marketing for Swann, said in a statement.

Technology for accessing surveillance equipment by mobile devices is being offered by others. Genetec introduced Tuesday the Security Center Mobile app that works in conjunction with the company's mobile server. Once connected to the surveillance equipment, the server transcodes incoming video and streams it to either a BlackBerry, iPhone or iPad. The software is aimed at companies that have security guards in buildings.

Companies offering home security systems that included cameras and sensors have also introduced smartphone access to watch video or control the system remotely. Such vendors include FrontPoint Security and Verizon, which introduced its security system for the home at CES.

Swann is among the first to add mobile capabilities in a DVR-based security system geared toward small businesses or people who want to keep watch of their homes. Besides remote viewing, the DVR4-2600 provides email notification when motion is detected, a USB port for back up and transfer of footage to a PC, and VGA output for connecting to a TV or LCD monitor.

The new kit is scheduled to be available in March for a manufacturer suggested retail price of $449.