Black Hat Europe researcher builds prototype device that could be used to steal corporate data, listen in on voice calls, videoconferences
Kelly Jackson Higgins
Editor-in-Chief
February 01, 2013
You know that docking station you snap your laptop into at the office? It can be hacked, too.

A British researcher next month at Black Hat Europe will show just how valuable those seemingly benign devices can be to a determined attacker targeting an organization or group of users. Andy Davis, research director for U.K.-based NCC Group, built a prototype hardware device that can easily be placed inside a laptop docking station to sniff traffic and, ultimately, steal sensitive corporate communications information from the laptop.

"You see docking stations all over the place in organizations because people are using hot-desking type environments, so different laptops can be attached to [the docks] each day," Davis says. "And they are considered a trusted part of the infrastructure: Nobody thinks someone might tamper with one or swap one for another. Admins are more concerned with protecting your laptop: That's where the money is and the information."

But Davis says docking stations, which are rarely secured physically, can easily be rigged with rogue devices that intercept everything from data traffic to USB devices to softphones to videoconference traffic, even if it's encrypted. "If you have access to a dock, you have information on all the other ports, such as softphones or videoconference traffic ... It can capture traffic before it's encrypted and after it's decrypted."

The attacker would need physical access to the docking station, which Davis found has plenty of open space in its internals. "There's some electronics in there, but there is space for additional electronics to be put in there," he says.

He built his proof-of-concept with a Dell docking station -- only because it's one his company uses, he says -- and a single-board Raspberry Pi computing device running Wireshark, which he inserted inside the docking station itself. Adding the hardware was simple: The docks have plenty of open space in their internals, Davis says. 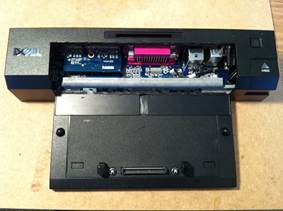 A look inside a "clean" docking station

With a permanent connection to the network and a power supply, these devices could be an attractive entry for a targeted attack, he says. "It's a potential piece of interception equipment, and it blends in with the office environment," he says. "And if an attacker gets access to the doc, he has access to all information on the other ports."

It's just another example of how even the most low-profile hardware can be abused to give an attacker a foothold into an organization. Researchers at Rapid7 this week said they found that between 40 and 50 million networked devices are wide open to attack over the Internet via flaws in the pervasive Universal Plug and Play (UPnP) protocol that's enabled by default in most printers, routers, network-attached storage, IP cameras, media players, smart TVs, and even video game consoles.

Unlike the UPnP vulnerabilities plaguing those devices, the docking station hack is more about weak physical security and valuable access, much like a point-of-sale PIN pad or an ATM machine, both of which have been plagued by skimmer-type attacks for several years now. "It's a similar concept where you're trying to collect information and remotely gain access via a covert channel," Davis says. "With a POS, if you have an implant collecting credit- and debit-card numbers and PINs, it will send that information wirelessly back to the attacker. That's a similar kind of approach I'm taking here" with the docking station hack, he says.

The most likely attack scenario for docks, he says, would be industrial espionage. "And someone would have to go in and [rig] the devices," he says. "Or a situation where someone would swap out a docking station with one with an implant in it. It could be an office cleaner or a contractor." 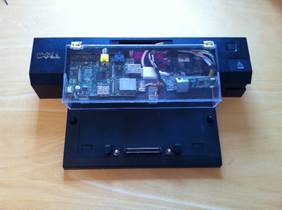 Davis says the best way to protect docking-station tampering is to outfit the equipment with anti-tampering features. A thermal imaging camera can detect whether a docking station has been compromised. "If there's an implant, bright red spots show up" on the camera view, he says.

Or a more basic approach would be to benchmark the normal weight of the device, for instance.