Agencies have until March 31 to come up with an implementation plan for a government-wide biometric-based credential system for employees and contractors.
Elizabeth Montalbano
Contributor, Dark Reading
February 04, 2011

Federal agencies have until March 31 to come up with an implementation plan for a new government-wide identification system that leverages biometric technology and smart cards.

The federal government has stepped up plans to use the Federal Personal Identity Verification (PIV) system to verify employee and contractor credentials to access federal facilities and IT networks and systems, according to a memo from the Department of Homeland Security (DHS) issued Thursday.

The move to the system is mandated by Homeland Security Presidential Directive 12 (HSPD 12), a federal cybersecurity initiative the government said is aimed at increasing security and efficiency, reducing identity fraud, cutting costs and protecting personal privacy. Cybersecurity is a chief concern of the federal government, and the system is one of many it's taking to provide more security both internally and externally.

In addition to outlining a time frame, the memo also lays out requirements for how agencies must ensure their facilities and IT systems are ready to accept the PIV cards. 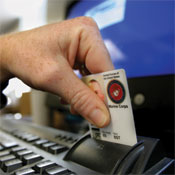 The DHS mandates that all new systems under development must support PIV credentials according to guidelines from the National Institute of Technology (NIST) before they can be deployed.

Further, effective in October at the beginning of the government's 2012 fiscal year, agencies must upgrade all existing "physical and logical" access control systems to support the PIV system before they can use any technology refresh funds for other projects.

The DHS also is requiring that any procurements involving facility or IT system access meet HSPD-12 policy. PIV credentials and acceptance of the credentials also must be interoperable, according to the memo.

The memo directs each agency to pick a lead official to oversee their implementation plan.