The fast-booting BlackJack device aims to securely and quickly extract data without leaving a footprint behind. 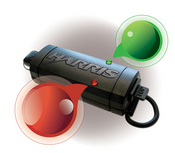 Harris BlackJack Thumb Drive
A new fast-booting USB drive will allow military, intelligence, and law-enforcement officials to extract data quickly from computers, particularly during cybersecurity missions, according to the company that developed it.

The BlackJack thumb drive, introduced Monday by Harris Corp., was designed for situations in which data must be removed quickly and stealthily, such as in cyber intelligence and military operations.

The device is meant to leave behind no footprint, which makes it optimal for missions where secrecy is crucial, according to Harris.

The device also is applicable for use in computer forensics, which mine computers and digital storage devices for information that can be used as legal evidence.

BlackJack boots in less than three seconds and automatically scans and copies data, prioritizing it based on search results. It also securely partitions search results for analysis.

Additionally, the device has LED indicators to alert people that targeted data is located so they can be sure it's what they were looking for, a feature that sets it apart from competitors' devices, the company said. The indicators also alert someone to the absence of targeted data.

Harris develops communications and IT products and services used by the federal government.