SEARCH
A minimum of 3 characters are required to be typed in the search bar in order to perform a search.
Announcements
Event
Emerging Cybersecurity Technologies: What You Need to Know - A Dark Reading March 23 Virtual Event | <GET YOUR PASS>
Report
Black Hat USA 2022 Attendee Report | Supply Chain & Cloud Security Risks Are Top of Mind | <READ IT NOW>
PreviousNext
Perimeter
3 MIN READ
Security Insights

As 2012 comes to a close, cybercriminals are taking advantage of your Android app purchases with mobile malware. Be on high alert after you install new Android apps from third-party markets and Google's
Dark Reading Staff
Dark Reading
January 01, 2013
As 2012 becomes 2013, there has been a lot going on for the holidays and upcoming New Year, both in and out of cyberspace. This type of hustle and bustle is the perfect opportunity for cybercriminals to take advantage of our hurried lives.

When you are preoccupied, your guard is down for malware authors to strike.

SophosLabs has been extra busy during the holidays, as well. While I don't work in SophosLabs, I do have limited insights to some of its activities. The Android platform is the primary focus for cybercriminals to deliver mobile malware to you via the third-party markets and even Google Play.

Apple released version 6.0.2 for iOS on Dec. 18, which only had a fix for a Wi-Fi bug. That got the Apple forums abuzz with several reports of reduced battery life. No security updates? I searched the CVE database and the last three reported vulnerabilities were patched in security update 6.0.1 on Nov. 1. Nice job, Apple!

In the context of mobile malware, does that make iOS a more secure platform than Android?

What Is Old Is New Again
There appears to be a recycling of some of the malware attacks used last year, mainly stealing data and opening backdoors. SophosLabs' detection of apps such as Andr/NewYearL-B (also known as CounterClank) over the past couple of weeks has spiked. On Dec. 11, SophosLabs detected 3,687 instances of NewYearL-B malware/Potentially Unwanted Application (PUA) over a six-month period with daily updates to the report. Over the next 20 days, Andr/NewYearL-B has been detected a total of 7,158 instances in the same report. That's a 94.14 percent increase.

Compare that to the next most active malware, Andr/BatteryD-A, in the same period with 966 detected instances. That is a 641 percent difference. 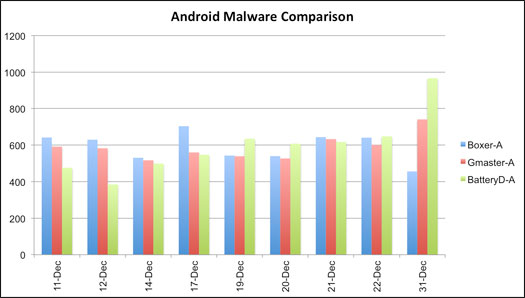 Looking at other Android malware, Andr/Boxer-A and Andr/Gmaster-A, compared to Andr/BatteryD-A, appears to be a competition of who can successfully deliver the most mobile malware.

Looking at the graphic below, earlier in December Andr/BatteryD-A (476 detections) doesn't have nearly as much success as its closest competitors. Just before the Christmas holiday, Andr/BatteryD-A starts to pick up momentum with 648 detections. 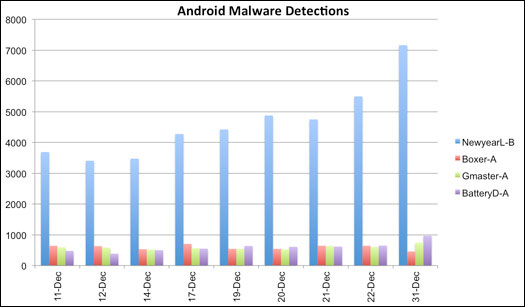 How To Protect Yourself And Your Users
As the mobile malware detection market matures, you still need to rely on your own gut feel. If it doesn't feel right, it isn't.

First off, before downloading anything, read the reviews and check the reputation of the app in the Google Play marketplace.

Third, don't root your device unless you really know what the hell you are doing.

Last, use a mobile security solution to scan your device and its apps. There are some very good, free Android Mobile Security apps available at Google Play store. You just need to see for yourself.

Let's all put some protection on our Android smart devices and ring in the new year without any malware.