The highly anticipated report form the DEF CON Voting Machine Hacking Village finds that any number of voting machines used in US elections are vulnerable to any number of attacks or hacks.

At this year's DEF CON show, organizers constructed a Voting Machine Hacking Village for the second year in a row. This time around, the Village included more details of the overall election environment in the US, ranging from voter registration records to election night reporting.

Now the verdict is in and it's not good as we head into November.

The number and severity of vulnerabilities found on the equipment was "staggering," according to a detailed writeup recently released by the Village organizers.

Additionally, the organizers of this year's event found dozens of vulnerabilities on equipment that is still used throughout the US.

For example, a voting tabulator currently used in 23 states can be remotely attacked through a network. Since this one machine has a high amount of traffic that passes through it, hacking one of them could lead to poisoning of the overall Electoral College results, according to the report. 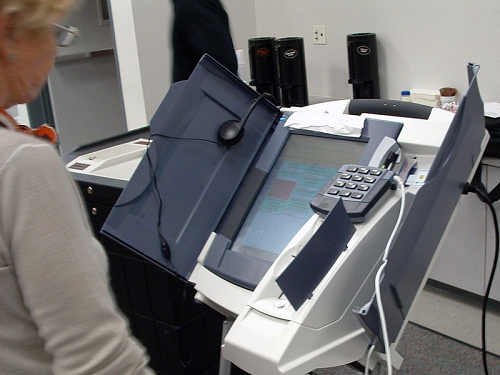 The same machine has a critical vulnerability that was reported a decade ago to the vendor, but remains unfixed as of its use in 2016.

Researchers also found that a machine currently used by 18 states can be hacked in under two minutes. Given that the average voter takes six minutes to cast their ballot, this shows that a hack can be performed at the polling place within the normal voting time.

Plenty of targets
In order to study voting hacking, organizers went to secondary markets such as eBay, as well as government auctions to find used voting machines and other hardware. All told, they ended up with:

The Voting Village did not provide any Election Management Systems (EMS) to attendees. In a real election environment, this system is a key element as the originator and aggregator of election data.

In formal studies, it has been found to be the most vulnerable element. An EMS can radiate additional attack surfaces and vectors across the elections system as a whole.

While an EMS is a critical part of a real election system, it was not considered a critical element within the DEF CON Village.

The network used in the tests was generated by KIG CyberRange. It was considered by the Villagers to be safe, virtual and isolated. It also allowed hackers the freedom to attempt attacks like an SQL Injection in order to compromise the simulated elections office. The attackers had the Kali Linux toolset available to them for manipulation and use.

The network also enabled exfiltration of the data that was designated as the target.

The suspect machines
Let's get closer to what was found in some of the hardware tested. What's there?

The Diebold ExpressPoll-5000 is an electronic pollbook, used by individual poll workers to help check voters in before they are permitted to vote. Its operating system is a version of Windows CE.

Investigators were able to access the file system, as well as read and write the voter databases using the widely available SQL Lite database program. The investigators also found entries in the database where the passwords to the ExpressPoll-5000 were stored in cleartext.

The Dominion AVC Edge is a touchscreen machine with direct-recording electronic capabilities. It is activated by a smart card, and records votes on internal flash memory.

The Edge's hardware is common and there are no obstacles to creating rogue software deployments for the device. The lack of security is pervasive, owing to the liberal threat model seemingly present when it was manufactured.

The DEF CON Villagers found that the voter activation card was programmed to automatically reset itself after activating the device. This could allow the machine to be used to cast unlimited number of ballots, which is what was found to occur.

Villagers also realized that this particular machine could allow an attack to be distributed remotely with no physical access to the voting machine. Indeed, Villagers found that third parties with no access to the EMS can create rogue election definitions which are indistinguishable from real elections.

Since the only record of a voter's intent is in digital form the intent becomes manipulatable and the machine's summaries unreliable.

The ES&S M650 is an electronic ballot scanner and tabulator manufactured by ES&S. It is used for counting both regular and absentee ballots.

There is some pizzazz to it. It launches ballots through an optical scanner to tally them, and keeps count on an internal, 128MB SanDisk flash storage card.

It runs the QNX 4.2 operating system on an Octagon 5066 Board with an AMD Am5x86 processor at 133MHz. If you use a $10 adapter (VTC-9F to DB-9 adapter cable, item 1041), a serial connection can be established to the M650 machine by connecting to the main 5066 CPU board. Getting around the cabinet locks is not a problem.

It seems that connecting a laptop will allow root access to a serial terminal session with username "root" and no password. There is not even minimal account security, according to the Villagers.

There are other communication ports in the device, and other ways to manipulate stored data as well.

A Zip disk, which is an obsolete storage device, can be read by them. It's also an attack surface. If there is an autorun program on the voting machine, the M650 is then simply looking for a file on the Zip disk with a certain name. It will trust and execute it with the maximum level of privileges.

That’s not a good way to do things.

Decades of problems
Over a decade ago, the University of Pennsylvania gave a negative evaluationto the machine.

The election process is at risk from the tools used to carry it out. The threat is obvious and well-researched. Efforts like those of the Villagers stand to remind us of the stakes that are involved.