The Internet is a vital tool that helps LGBTQ+ community members communicate without fear of persecution -- and strong encryption is a critical part of this equation.

Encryption is the process of scrambling information so it can be read only by someone with the keys to open and unscramble that information. It's a tool designed to help Internet users keep their online data and communications private and secure, and it plays a critical role in protecting day-to-day digital activities, such as online banking, shopping, and healthcare, while also preventing data breaches and making sure private messages stay private.

Encryption is also essential for establishing a foundation of trust online that helps protect freedom of expression and privacy. For some communities, like the LGBTQ+ community, encryption is especially crucial in keeping people safe both online and in real life.

The Internet is a vital tool that helps LGBTQ+ community members communicate without fear of persecution — and strong encryption is a critical part of this equation.

Privacy While Coming Out and Connecting
Finding a trusted community to connect with can be difficult, particularly for LGBTQ+ community members. Many risk losing family and friends by coming out, so they often rely on online communities to find support systems. Research shows that LGBTQ+ community members are core users of the Internet, with 80% of LGBTQ+ community members saying they participate in a social networking site compared with 58% of the general public. For LGBTQ+ youth, who may live at home with nonsupportive family members, encryption helps them communicate safely and on their terms.

Transgender Communities
Transgender communities have unique challenges and are especially vulnerable to violence, unemployment, and persecution. The Internet offers transgender communities opportunities to build support networks with other community members and allies. Encryption can help ensure online communications and activities are kept private, minimizing the risk of violence and stigma that disproportionately affects this community. 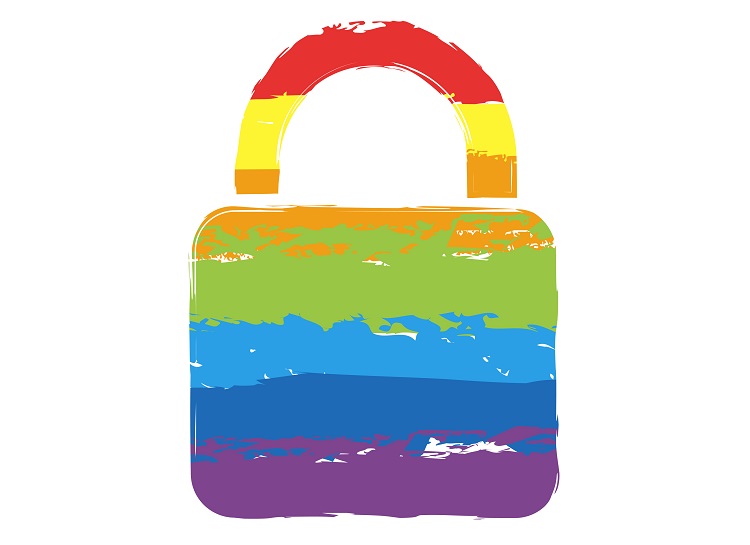 Access to Healthcare
Encryption is a key tool that can empower transgender community members to safely use the Internet to find doctors and treatment during transitions. Doctors can use encrypted services to care for patients safely and securely to eliminate the risk that their sensitive health data could be compromised. Encryption also helps LGBTQ+ community members communicate with accepting and trusted healthcare providers openly, thereby greatly increasing the quality of health services and outcomes.

Protecting Against Discrimination and Harm
In many parts of the United States, LGBTQ+ community members continue to face discrimination in housing, employment, and many other sectors for being who they are. For instance, only 22 states and the District of Columbia prohibit employment discrimination on the basis of sexual orientation or gender identity. This means there are 28 states where companies can fire their employees for identifying as LGBTQ+. By using encrypted services, apps, and platforms, members of these communities are better equipped to protect their privacy and choose whether or not to share their identification with others.

In far too many countries, being a member of the LGBTQ+ community is still considered unlawful. While authorities may argue that backdoor access can help catch criminals, in many countries (between 72 and 76 at last count) being LGBTQ+ is considered a criminal offense. LGBTQ+ community members in these countries are subject to prison, torture, and even the death penalty simply for expressing their identity. In numerous countries, "gay propaganda," or merely the act of speaking out about LGBTQ+ issues, is a criminal activity. Without encryption, LGBTQ+ community members living in or traveling to these countries may not be able to find communities and outlets safely and comfortably for self-expression and might be left vulnerable to prosecution and persecution.

Strong Encryption in the US Protects LGBTQ+ Community Members Everywhere
As is true for many technology companies with headquarters based in the United States, policy decisions made here will affect and set precedents around the world. If the nation plays a leading role in creating policies that support strong encryption, it may be easier to persuade other countries to follow suit.

While some would argue in favor of "backdoor access," which generally refers to providing law enforcement and intelligence agencies with the power to intercept and access encrypted communications to help combat crime, the fact is that any digital backdoor can potentially be accessed by anyone — law enforcement and bad actors alike.

Creating encryption backdoors not only weakens security for everyone; it also puts the lives of LGBTQ+ community members at greater risk of harm.

Forced Weakness Weakens Us All
Any point of entry to a secure service is a weakness. Backdoor access puts private information and confidential conversations at risk because it allows government or law enforcement access to private information and simultaneously creates a doorway for bad actors through the same entry point. There is no digital lock that only law enforcement can open and others cannot.

In particular, strong encryption helps ensure the safety, privacy, and livelihoods of LGBTQ+ community members and other marginalized individuals around the world.