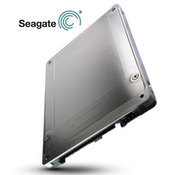 Seagate Pulsar XT.2 SSD
Seagate Technology has introduced two solid-state drives that the company says have the performance levels needed to meet the demands of the corporate data center.

The company launched the Pulsar.2 and Pulsar XT.2 on Tuesday, both 2.5-inch SSDs with maximum capacities of 800 GB and 400 GB, respectively. The Pulsar.2 supports both 6 Gb per second SAS and SATA interfaces, while the XT.2 only a 6 Gb/s SAS bus.

The Pulsar.2 is the more unusual of the two drives because it comprises multi-level cell (MLC) NAND flash, which gives it twice the capacity of the single-level cell XT.2. MLC SSDs are just starting to be deployed within data centers for running applications that need faster performance than what's available from traditional hard disk drives.

"We're still at the very early stages of use of MLCs in the enterprise," Jeff Janukowicz, analyst for IDC, said in an interview.

The need for speed by applications such as server virtualization, online transaction processing, data warehousing, and cloud computing is driving an increase in use of SSDs in the data center. Last year, overall revenue from SSDs for PCs and data centers grew to $900 million from $425 million in 2009, according to IDC. This year, worldwide revenue is expected to reach $1.3 billion.

Seagate accounts for about 60% of the market for enterprise hard drives, so is in a good position to ride the SSD wave, Janukowicz said. "Seagate is very well positioned to capitalize on the growth."

SSDs are far more expensive than hard drives, so their use is limited to speed-hungry applications. Seagate has focused on reliability with its latest products to make them more attractive to enterprises. Both drives have input/output error detection and correction and 2 million hours of mean time between failures (MTBF). The Pulsar.2 comes with a three-year warranty and the XT.2 with a five-year warranty.

The Pulsar XT.2 is the fastest drive in the Seagate portfolio, with sustainable random reads at 48,000 and writes at 22,000 input/output operations per second (IOPS). Sequential reads are 360 MB per second and writes are at 300 MB/s.

Both drives are currently shipping to original equipment manufacturers (OEMs) and are expected to be available through sales channels in the second quarter.

The Savvio 10K.5 is expected to be available through OEMs in the first quarter and the 15K.3 in the second quarter.