Neither machines nor humans might be entirely trustworthy, but the cooperation of the two might be the answer to issues of misinformation, deep fake videos, and other issues of trust, say security leaders.

RSA CONFERENCE – SAN FRANCISCO – The need for trust — in machines, in systems, and in one another — was a central theme here today, when leaders took to the keynote stage to officially kick off the RSA Conference (RSAC), a meeting of tens of thousands of cybersecurity professionals.

Some of the themes discussed were the inherent trustworthiness of both humans and machines. How do artificial intelligence, the Internet of Things, misinformation campaigns, and the coming "biodigital era" erode trust? And what solutions can the security industry — as people and technologists — create to address that issue?

The crowd was first warmed by the voices of the Oakland Interfaith Gospel Choir and acclaimed actress Dame Helen Mirren, who gave the opening address. 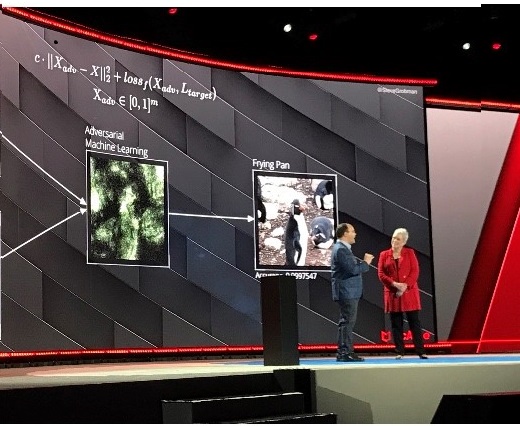 She dubbed the RSA delegates "a steadfast constellation of guiding stars that never waver," and continued: "You see, you, you, you are a hero … but you see perhaps you do not have to be such very solitary heroes. So, seize this moment to become better and stronger together."

"Thank you, thank you from me to you," she said. "Thank you for all you do, all you sacrifice, all you bravely represent."

RSA president Rohit Ghai and cybersecurity strategist-entrepreneur Niloofar Razi Howe followed by presenting both an image of the future that was first a harrowing tale of trust broken, and then a happy tale of trust restored.

"The key to the biodigital era is trust," said Ghai.

"But are we trustworthy?" countered Howe.

They presented the possibility that fear of exploitation and misinformation could cause regulators to take Draconian actions ("walls went up, and trust dried up"), but that it was possible for risk and trust the coexist. Just as the human body manages to survive despite being home to more bacterial cells than human cells, other systems can manage risk, they said.

Ghai described technology with a "'Spidey sense'-like human intuition" in which "every piece of technology is instrumented to sense risk and adjust its functionality based on risk."

They also discussed the concept of "trustworthy twins" — that humans and machines working together are more trustworthy than either is individually. While humans fail to remember passwords, artificial intelligence lacks empathy and is subject to the biases of the data it's given. A combination of humans asking questions and machines hunting for answers would be a more trustworthy duo.

Howe and Ghai also spoke of a "chain of trust" or "reputation bank account" that would keep a running record of organizations' positive and negative actions (such as times they misled the public or times they successfully repelled a cyberattack or were honest about a breach).

McAfee CTO Steve Grobman and chief data scientist Dr. Celeste Fralick further discussed trust as it relates to artificial intelligence models. They commented that the technology is both bereft of a moral compass and can be tricked. They presented examples of how the technology can be used maliciously in applications like deep fake videos and how, by poisoning machine learning classifiers, it could be tricked to identify a photo of a penguin as a photo of a frying pan.

"We must embrace artificial intelligence, but remember its limitations," said Grobman. "It's just math."

Liz Centoni, Cisco's senior vice president and general manager of IoT, spoke about another kind of trust during her presentation on industrial IoT security: the lack of trust between operational technology (OT) and IT teams.

"The OT world cares about safety, not data loss," said Centoni. "They want their systems to be up and running even when there's an outage. … They're measured on different things."

OT teams know they have an asset visibility issue, she said — it's not uncommon for industrial environments to be unable to see 40% to 50% of what's on their environment — but some of those assets have been in the environment for many years and don't speak languages like 802.1x. Any efforts to improve visibility are driven to improve operations, not stop cyberattacks.

"Lean in and learn about the OT environment," she said.