"Autonomous security" is DARPA's latest game. Its Cyber Grand Challenge will culminate at DEF CON with a contest to see which of these seven finalists' machines will automatically detect and remediate the most security vulnerabilities. 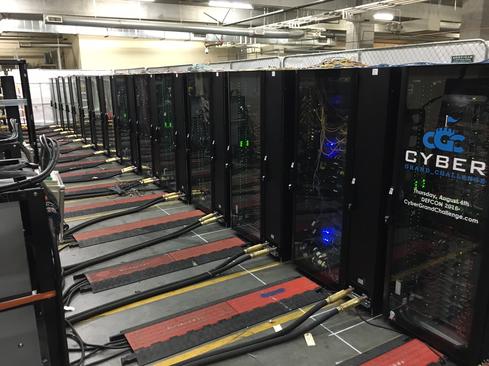 The Defense Advanced Research Projects Agency (DARPA) has a proud tradition of seeding research projects that lead to some of the world’s most important technology developments.

It was DARPA that funded the original research in the 1970s that led to the creation of the Internet and a decade ago, DARPA was behind some of the first research on autonomous cars, which are slowly becoming a reality.

Mike Walker, the DARPA program manager who headed up the Cyber Grand Challenge, says that analysts have estimated that on average, security flaws go unremediated for 10 months before being discovered and patched. This gives bad actors ample opportunity to wreak havoc on affected systems before they move on to exploit other machines.

Walker adds that is can take up to three weeks for security professionals to patch a system once malware is discovered. That’s just too long a window for bad actors to do damage.

The Cyber Grand Challenge, which was launched in 2013, aims to build autonomous systems that can bring the remediation time down to minutes or even seconds. Walker says that the conventional wisdom that says it’s only a matter of time when systems will be hacked as opposed to if they will be attacked is not acceptable today. Organizations rely on their computer systems to get work done and grow businesses and they must be kept safe. In fact, the world’s financial systems run on computers today and everything hinges on a sense of trust by the public that they are secure.

“Our role at DARPA is to see beyond the status quo and imagine something better -- a future where the network is defensible by default  -- and then chart a path to get there,” Walker says.

The seven finalists were selected among more than 100 teams that applied to win the cash prizes and gain exposure for their organizations. The top prize is $2 million, second prize $1 million and third prize $750,000.

Each of the finalists were given autonomous reasoning machines (ARMs) developed by DARPA and asked to write code that will let the machines function at a high level in cyber defense contests.

On August 4 at the Paris Hotel in Las Vegas during DEF CON, DARPA will release previously undisclosed code into a computer testbed and the seven machines will be challenged in a Capture the Flag format to find and patch within seconds the flawed code that’s vulnerable to be hacked. The goal is for the machines to find their opponents' weaknesses before the defending systems do. The teams will score points for defending their machines and lose points when the other teams find vulnerabilities.

Walker adds that the real goal of the Cyber Grand Challenge is to prove the viability of autonomous cyber defense.

“At a minimum, we’ll learn a lot from seeing how the systems fare against each other, and if we can even provide a clear proof of concept for autonomous cyber defense, that would be revolutionary,” he says. “In the same way that the Wright Brothers’ first flight didn’t go very far, but launched a chain of events that quickly made the world a much smaller place, a convincing demonstration that automated cyber defense is truly doable would be a major paradigm shift and would speed the day when networked attackers no longer have the advantage they enjoy today.”

The following slides provide an overview of each of the finalists, plus links to videos about the teams.