The Social Engineering Capture the Flag contest for kids is now an official DEF CON contest.

Call it a life-sized DEF CON version of the game Clue.

That's how Christopher Hadnagy, the mastermind behind the fourth annual Social Engineering Capture the Flag Contest for DEF CON Kids and chief human hacker at Social-Engineer.org, describes this year's contest, which will be held during the famed adult DEF CON hacker conference in Las Vegas.

This year's "Who Dunnit? A Social Engineering Corporate Crime!" is part and parcel of the official DEF CON conference's competitions. It previously piggybacked off DEF CON Kids, now known as R00tz. The premise of the contest is that a corporate crime has been committed, and the 5- to 12-year-old contestants must use a mix of social skills, password and cipher cracking, lock picking, and a little social engineering to get to the bottom of the caper.

"They interview people, crack ciphers, codes, and puzzles to remove clues from their docket to figure out who committed the crime and what the crime is," Hadnagy says.

Unlike the grown-ups' version of the Social Engineering CTF that Hadnagy and his team have run at DEF CON the past five years -- where contestants try to schmooze as much potentially sensitive information as possible from high-profile corporate targets via some open source intelligence gathering and live cold telephone calls -- the kid-friendly version is all about critical thinking skills.

The mini-social engineers will be assigned to two-person teams that combine a younger and an older contestant who are given a series of challenges that provide them with clues.

"The original concept was to help with critical thinking skills. Part of critical thinking is being able to work with a person you don't know and to be able to work as a team and plan," Hadnagy says. "This is a way to introduce our kids to some level of the security industry, the human side of the security industry, and showing them skillsets they can work on and use. They can own and use these skills... Our goal is to encourage them to think about security as a future" profession. 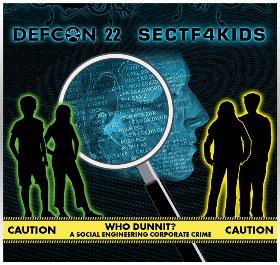 One alumna of the contest who has competed each year and is now a college student will return as a homecoming of sorts at this year's CTF. Ashley Wong will assist Hadnagy's CTF team of Amanda White and Tamara Kaufman. "She is helping us organize and run it. It's really cool because she played every year" of the contest, Hadnagy says.

As in past years, various security experts, DEF CON organizers, and DEF CON "goons" will play roles in the contest. Many of the contestants traditionally have been the kids of hackers or DEF CON attendees, but Hadnagy says there are several new contestants this year whose names he can't match to security industry regulars.

Each year, one team has finished far ahead of the others, but tradition has been that the other teams have continued on. "One team spent an hour trying to pick a lock and wouldn't accept help from Deviant" Ollam, says Hadnagy, referring to the lockpick master of DEF CON who also helps with the kids event.

"It's not a linear thing," so there's no official order to the flag capture. A team can be interviewing someone about the crime, picking a lock, or solving a cipher, in no particular order. "They have to solve the crime -- who did it, how they did it, and where they did it. But they have to complete every task."

The kids social engineering contest will be held on Saturday, Aug. 9, beginning at 9:30 a.m. Registration is under way for the event, which will include a chance to meet the famed social engineer-turned security expert Kevin Mitnick.

"They can meet someone who did it the wrong way but is now doing it the right way," Hadnagy says.

Rules and a registration form are available here.

Kelly Jackson Higgins is the Executive Editor of Dark Reading. She is an award-winning veteran technology and business journalist with more than two decades of experience in reporting and editing for various publications, including Network Computing, Secure Enterprise ... View Full Bio
Comment  |
Email This  |
Print  |
RSS
More Insights
Webcasts
5 Steps to Integrate SAST into the DevSecOps Pipeline
Are You Ready for When Cyber Attackers Get In?
More Webcasts
White Papers
Simplify Your App Security
NetFlow vs Packet Data
More White Papers
Reports
Can You Spare 10-12 Mins to Help Us Out with a Survey on Tech Trends?
Got 7 Minutes? Dark Reading Needs Your Help With Our Survey on Incident Response
More Reports
Copyright © 2020 UBM Electronics, A UBM company, All rights reserved. Privacy Policy | Terms of Service