The tools and techniques to create false videos via AI-driven image synthesis are getting easier to access every year, and few people know that better than ZeroFox’s Matt Price and Mike Price (not related). In an email interview with Black Hat's Alex Wawro, the pair of security experts shared their latest research, which will be presented at Black Hat USA in Las Vegas this summer.

Alex: Why are 'deepfakes' important?

Mike: Long story short, here at ZeroFox we do a lot of work in terms of analyzing content for security-related issues. We started off as a social media security company, and when I arrived here four or five years ago, most of what we were doing was 'Hey, is there something bad in this tech? Or, is there something bad in this image.' So that brought us to the question -- what about video?

A couple years ago, when deepfakes appeared on the scene, our research team organically took interest in the topic and we started looking into how they're created, and how we can develop protections against them. I've been working with Matt to really round out not just the offensive parts but also the defensive part: how do you detect these things, and do something against them?

Alex: How good is deepfake tech right now, and how quickly do you think it will pose a significant threat to security systems?

Mike: The research that's been done by other folks, and the work that we've done in understanding what's going on out there suggests that the tools and the resources required to produce deepfakes are much lower-cost now. Previously, stuff like this didn't really exist outside of Hollywood studios where they needed to synthesize a person's image. But now you have these tools where, anybody can download an open-source package and produce a fake video clip pretty quickly. So the cost has been brought down a ton, the complexity has been brought down a ton, so that's really the main risk factors.

As far as quality goes, from what we've seen there's still a lot of work going on to really perfect this stuff; you have a lot of little hiccups with regards to, for example, getting a variety of different videos, jumping through all kinds of hoops to get the right kinds of source images, and so on. So there are still a lot of hurdles to producing deepfakes that are really dynamic, with many people in the video moving around and changing positions. You see mostly short clips of a single person looking forward; there are still some limitations to what's easily accomplished with this tech.

But there's a lot of work going on. The tooling seems to be getting better and better, and people are doing a lot of exploration of different algorithms that may be able to produce better results with less input. So that's where things stand today. And as far as people using it for nefarious purposes, mostly we're seeing lots of proof-of-concept videos out there. Nicolas Cage is the guinea pig for a lot of the work being done, and then you see some political examples -- like the Obama video.

Alex: Why did you feel it was important to give this talk at Black Hat, and what do you hope attendees will get out of it?

Mike: A lot of people have asked about this subject; I know that in the federal space there are a lot of people thinking about whether this will be an issue in the future. So there's lots of questions in the air about what deepfake technology is, how it works, how real it can be, that sort of thing. We want to explain all that, and then walk you through what your options are for detecting deepfakes and doing something about it.

Matt: To piggyback off that, I'm mainly interested in the detection side, and I think this talk is important because I've seen some quite sensationalist headlines saying there is no solution to deepfakes, which isn't true. There are detection methods out there right now to detect deepfakes; DARPA's actually heavily investing in this area as well. So that's kind of the point, for me. We can detect deepfakes. There are tools to do it; this is just a security problem like any other.

Alex: What are you hoping to get out of Black Hat this year?

Matt: I'm really interested in some of the developments in neural networks and their applications to cybersecurity problems. My role at ZeroFox is mainly to run our data science program, so I'm always interested in the newest and latest tech on that front, and neural networks seems to be one of the hot topics for solving problems that traditionally we've had issues solving. 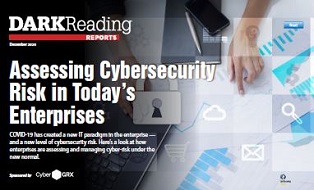 Assessing Cybersecurity Risk in Todays Enterprises COVID-19 has created a new IT paradigm in the enterprise  and a new level of cybersecurity risk. This report offers a look at how enterprises are assessing and managing cyber-risk under the new normal.
Download Now!

How IT Security Organizations are Attacking the Cybersecurity Problem