New research released by LogRhythm Labs offers details behind the malware campaign commonly referred to as “OilRig,” including the tools, techniques, and procedures (TTPs) used to compromise security operations centers of government, financial, airline and critical infrastructure entities located primarily in the Mideast.

Unlike earlier threat intelligence reports, which addressed only a few indicators of compromise by OilRig, this new research specifies the full front-end infrastructure of the campaign, including malware associated with initial compromise (stage 1 droppers) and a significant number of indicators that have yet to be made publicly available.

Cyberattacks attributed to OilRig first surfaced in late 2015. Since then, the threat intelligence community identified two periods of high activity following the initial attack: in May and October 2016.

All known samples from these efforts used infected Excel files attached to phishing emails to infect victims, such as the phishing email — shown below — that appeared to be sent to an organization within the Turkish government. Once infected, the victim machine can be controlled by the attacker to perform basic remote-access Trojan-like tasks, including command execution and file upload and download. 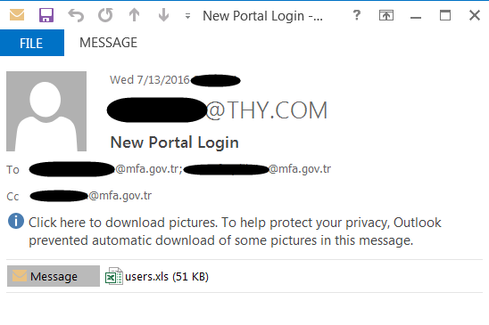 Moving Targets
Early attacks focused on Middle Eastern banks, government entities and critical infrastructure entities. However, targets have expanded both geographically and by industry over time. For example, the October 2016 attacks targeted companies in the U.S., as well government organizations, companies and government-owned companies in Saudi Arabia, United Arab Emirates, Qatar, Turkey and Israel. OilRig also expanded its aim to include a number of Middle Eastern airlines.

History suggests this attacker is most interested in espionage, rather than other malicious activities such as theft of intellectual property. However, it is also likely that the attacker will continue to expand to other industries. 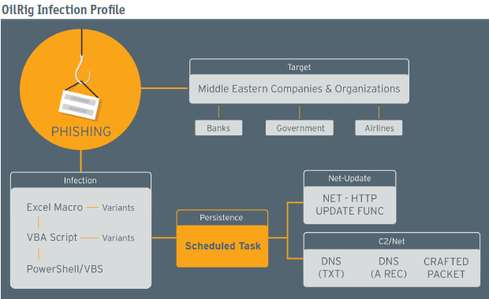 Malware Submission by Country
The origin of the malware submissions, obtained through analysis of threat intelligence data, revealed both targeted countries and those countries that are likely performing analysis on this campaign group. For example, Saudi Arabia — with 22 unique submissions — likely contains the majority of targeted organizations by this actor group. Separately, representation from Great Britain and the United States, with 11 and 9 different submissions of malware respectively, likely reflects their analysis on this campaign rather than being direct targets.

Other countries of note include United Arab Emirates, Qatar, Israel, Turkey, and Azerbaijan. While the report doesn’t fully confirm that this actor group attacked organizations from each of these countries, there are several indicators that support this conclusion. Filenames such as "TurkishAirline_Offers.xls" and "Israel Airlines.xls" make a strong correlation that these organizations were targets at one point.

Malware Submission Analysis
The LogRhythm Labs team identified 23 unique, weaponized, Microsoft Excel files that contained OilRig malware. Based on the filenames used, their country of origin, when they were identified, and the command and control method, it was determined that nearly all samples fell into one of four groups. A representative sample from each of these groups was analyzed, in detail, in the report.

When the weaponized documents are executed, most malware samples use VisualBasic for application payload to infect a system with PowerShell (.ps1) and VisualBasic scripts. The malware achieves persistence by Microsoft Scheduled Tasks, and its capabilities include very basic command execution, file upload and file download capability.

While not overly sophisticated, OilRig attacks are highly effective. The attacker has created a simple, powerful backdoor using infected Excel files laced with malicious VBA, VBS, and PowerShell code. To date, the attacker has primarily used Excel files attached to spear phishing emails for malicious payload delivery. However, this attack could be easily incorporated into many different file formats that could also be attached to phishing emails.

Despite the fact that only a few industries have been targeted by this campaign, this code is widely known, which means other threat actors could incorporate it into their own campaigns and target different countries or industries. Given this, it would be wise for security analysts to guard against similar attacks regardless of their industry or location.

James Carder is the CISO and VP of Labs for LogRhythm and an IDSA Customer Advisory Board Member. He brings more than 22 years of experience working in corporate security and consulting for the Fortune 500 and US government. At LogRhythm, he oversees the company's governance, ... View Full Bio
Comment  |
Email This  |
Print  |
RSS
More Insights
Webcasts
Cyber Attack Evasion Techniques
Zero-Trust In Practice
More Webcasts
White Papers
Let's Talk: Why Language Matters in Cybersecurity
PWAs: Powering Next Gen Business on the Web
More White Papers
Reports
Assessing Cybersecurity Risk in Today's Enterprise
The Definitive Guide to Managed Detection and Response (MDR)
More Reports

Webinar Archives
White Papers
Let's Talk: Why Language Matters in Cybersecurity
Protection Inside and Outside the Office: The New State of Cybersecurity
PWAs: Powering Next Gen Business on the Web
Serial Console Servers
5 Steps to Perimeter-Less Security: Adopting Zero-Trust to Secure Access

All Videos
Cartoon
Latest Comment: I don't know anything about Information Security but I have to decide if you qualify for an interview with the Security team.  I have a set ...

How Enterprises Are Developing and Maintaining Secure Applications The concept of application security is well known, but application security testing and remediation processes remain unbalanced. Most organizations are confident in their approach to AppSec, although others seem to have no approach at all. Read this report to find out more.
Download Now!

Bug Report
Enterprise Vulnerabilities
From DHS/US-CERT's National Vulnerability Database CVE-2020-5243PUBLISHED: 2020-02-21
uap-core before 0.7.3 is vulnerable to a denial of service attack when processing crafted User-Agent strings. Some regexes are vulnerable to regular expression denial of service (REDoS) due to overlapping capture groups. This allows remote attackers to overload a server by setting the User-Agent hea...
CVE-2019-14688PUBLISHED: 2020-02-20
Trend Micro has repackaged installers for several Trend Micro products that were found to utilize a version of an install package that had a DLL hijack vulnerability that could be exploited during a new product installation. The vulnerability was found to ONLY be exploitable during an initial produc...
CVE-2019-19694PUBLISHED: 2020-02-20
The Trend Micro Security 2019 (15.0.0.1163 and below) consumer family of products is vulnerable to a denial of service (DoS) attack in which a malicious actor could manipulate a key file at a certain time during the system startup process to disable the product's malware protection functions or the ...
CVE-2020-5242PUBLISHED: 2020-02-20
openHAB before 2.5.2 allow a remote attacker to use REST calls to install the EXEC binding or EXEC transformation service and execute arbitrary commands on the system with the privileges of the user running openHAB. Starting with version 2.5.2 all commands need to be whitelisted in a local file whic...
CVE-2020-8601PUBLISHED: 2020-02-20
Trend Micro Vulnerability Protection 2.0 is affected by a vulnerability that could allow an attack to use the product installer to load other DLL files located in the same directory.