Manufacturer Fusion Garage pulls plug after one year, but says it will launch Android-based tablets in 2011.
Esther Shein
Contributor
November 12, 2010 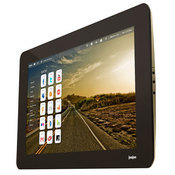 The joojoo tablet, which has had a checkered one-year history, is being discontinued.

Its maker, Fusion Garage, launched the 12-inch Linux-based touchscreen tablet as a web-only device last February for $500. Preorders were reportedly under 100 units. After the collapse of a partnership between tech blogger Michael Arrington of Tech Crunch and Fusion Garage to build an inexpensive tablet for web surfing, Fusion Garage said it would sell the device on its own and under a different name (“juju” means an object with magical powers in West Africa). Arrington sued in late 2009, and the federal lawsuit is ongoing.

The Singapore-based Fusion Garage said Thursday it plans to launch other devices for release in the first half of next year that will have new hardware and run on an Android-based OS it is developing, according the website e27.

“I think it’s very obvious with the advance of the iPad that while the web remains probably the number one thing that we do with our devices, the lack of end-to-end connectivity means that there’s a need to have a hybrid, to have both a web and non-web experience. And that’s where we fell short with our product,” Fusion Garage founder Chandrashekar Rathakrishnan told e27.

Rathkrishnan wouldn’t confirm how many joojoos have been sold to date, but acknowledged that the device hasn’t seen a strong showing in the U.S., e27 reported. The device has done better in Europe and Asia, he said.

Certain vertical industries, including transportation and health care, are interested in a customized version of the joojoo, and Fusion Garage will use its software and hardware in a new device that will have 3G, Rathkrishnan told e27. Joojoo owners will continue to receive support, he added.

While the joojoo was only sold through Fusion Garage’s website, the new devices will be sold worldwide through retailers and carriers, Rathkrishnan said.