Attackers are becoming more sophisticated in their obfuscation and anti-analysis practices to avoid detection.

As cybercriminals continue to hone their attack approaches, they are also tuning their post-intrusion models. Many modern malware tools already incorporate features for evading antivirus and other threat detection measures, but research shows that attackers are also becoming more sophisticated in their obfuscation and anti-analysis practices to avoid detection if an infiltration attempt is successful.

Based on analysis of data from Fortinet's "Q2 2019 Threat Landscape Report," this article examines a recent spam campaign that used novel anti-analysis and evasion techniques.

Anatomy of a Spam Attack
Many modern malware tools include features for evading antivirus and other threat-detection measures. Examples include routines that enable the malware to detect when it is running within a sandbox environment, functions for disabling security tools on an infected system, and the use of junk data to make disassembly harder.

A good example of how adversaries are tweaking these anti-analysis techniques can be found in a macro that was used in a major spam campaign in Japan last quarter. This campaign involved a phishing email with a weaponized Excel document attached that contained a malicious macro. Our analysis showed the macro had attributes for disabling security tools, executing commands arbitrarily, and causing memory problems — and also ensuring that it would run only on Japanese systems.

The macro used in the Japanese spam campaign, like much other malicious software, was designed to look for certain Excel-specific variables at multiple points during execution to ensure it was running within an Office Excel environment and not in an emulator. One Excel property that it looked for in particular — the xlDate variable — was something that we haven't observed before in other malware. Interestingly, the variable appears to be undocumented in Microsoft's documentation —at least, we were unable to find it. 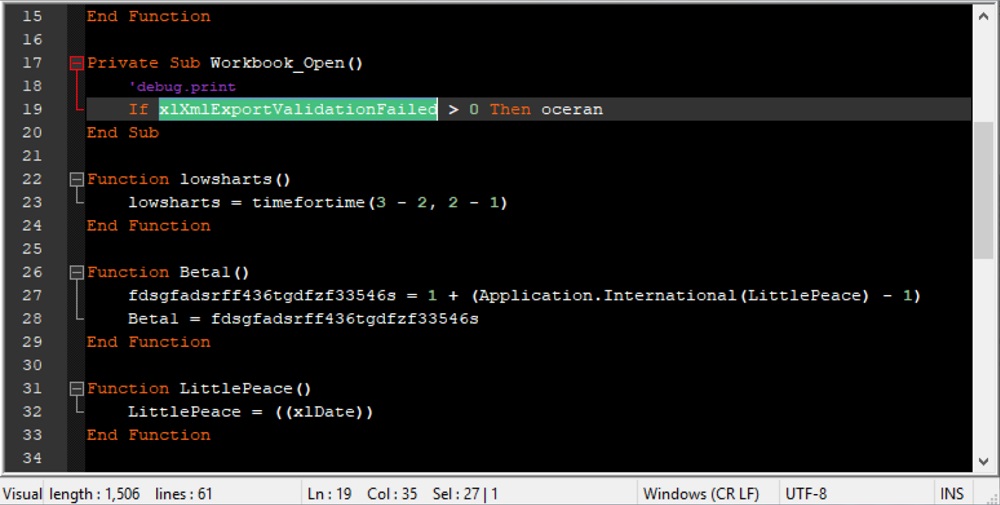 An example of anti-analysis used by the macro. Few macros actually check for Excel-specific variables such as xlXmlExportValidationFailed. In so doing, the authors have ensured that the macro is only executed within an Office Excel environment. This means that macro emulators may fail to detect it if they do not properly emulate specific Excel variables.

The use of such anti-analysis techniques, though nothing new, appears to be growing. In June, for example, security researchers found a new variant of the Dridex banking Trojan that evaded several traditional antivirus tools by using 64-bit DLLs with file names of legitimate Windows executables. The file names and associated hashes changed each time the victim logged in, making it hard for signature-based antivirus tools to spot the malware on infected host systems. This Dridex variant also took advantage of a known weakness in the Windows Management Instrumentation Command-line (WMIC) utility to bypass application whitelisting measures and execute malicious VBS code embedded within an XSL file.

Multiple reports of downloaders with sophisticated, built-in defense-evasion techniques also appeared in the second quarter. One example is AndroMut, a downloader that the Russian-speaking TA505 group used in a campaign targeting individuals working at financial companies. AndroMut's anti-analysis features include sandboxing and emulator verification and checks for mouse movement and debuggers. At least two other downloaders — Brushaloader and a new version of JasperLoader — were reported in the second quarter as having similarly advanced evasion mechanisms.

Best Practices
Here are five best practices you can implement to build or expand on a multilayered defense strategy.

Future-Forward Security
Malicious actors aren't only creating new ways to access your network but are also developing new ways to remain undetected once in and do as they please for as long as they like. By understanding the risks and putting the right defenses in place, your organization can defend itself against not only these latest attack trends but also those that have yet to be devised.

Toward that end, FortiGuard creates adversary playbooks based on its role in the Cyber Threat Alliance. These playbooks describe the tools, techniques, and steps that adversaries use to achieve their goal. The goal is to enable IT security teams to disrupt malicious actors more systematically. The most recent playbook dissects Zegost, an info-stealer used recently against a Chinese government agency, and is available here.

Derek Manky formulates security strategy with more than 15 years of cyber security experience behind him. His ultimate goal to make a positive impact in the global war on cybercrime. Manky provides thought leadership to industry, and has presented research and strategy ... View Full Bio