Unless consumers can buy the tablet PC for less than they'd pay for an Apple iPad, it will have a tough time competing in the crowded market.
Esther Shein
Contributor
October 11, 2010 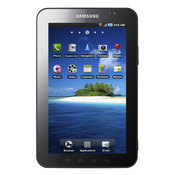 Samsung Galaxy Tablet
Although the Apple iPad retails starting at $499, the Galaxy Tab, Samsung's first Android-powered tablet PC is expected to be priced at $649 -- unless customers commit to a new, two-year service agreement. Then the price will be bumped down to $399 after a $50 rebate.

Unlike the iPad, which is offered with 3G connectivity only on AT&T's network, the Galaxy Tab will be available from all of the major U.S. carriers, including Sprint and T-Mobile. However, the specs of the Galaxy Tab will not stay the same across the board. Notably, Sprint's version will not come bundled with WiMax, and the T-Mobile version will not have HSPA+. None of the versions will have the ability to make cell phone calls.

Samsung has not confirmed what the price of the Galaxy Tab will be or when it will ship. However, if the Tab's price tag is higher than the iPad, it is not expected to help the new device compete in the fiercely competitive tablet market. Some projections have the Galaxy Tab shipping in the U.S. in time for the holidays, starting on Nov. 1 at Verizon and Nov. 14 at Sprint.

The Samsung Galaxy Tab runs on Google's Android 2.2 operating system, and comes with a 7-inch capacitive touchscreen with a resolution of 1024 x 600 pixels.

Other tablet launches expected in time for the holidays includes one from Microsoft based on the Windows 7 OS. Vendors that have announced tablets without launch dates include Dell, Hewlett-Packard, and Asus.