How To Fix The Gaping Holes In Mobile Security

From a policy perspective, an MDM system is what gives your rules teeth--without it, a policy on encryption is just a suggestion. Recommendations:

>> Work out a funding scheme for MDM that gets business units some skin in the game. These systems run anywhere from $2.50 to $5 or more per device per month, and that typically comes out of the IT budget.

>> Align required MDM features with your encryption, authorization, device support, and other policies.

>> If an MDM purchase must be delayed, at least take advantage of the password policy enforcement and remote wipe capabilities of Microsoft's Exchange Active Sync.

>> Investigate what carriers can do for you. For example, the industry recently announced plans to "brick" stolen smartphones as a means to deter theft. Carriers will begin disabling devices that are reported stolen based on the IMEI code rather than simply disabling the SIM card. This essentially eliminates the black market for stolen devices.

We also questioned respondents regarding the steps they take to manage apps on both personally and company-owned devices, as well as steps to mitigate the impact of mobile malware. We typically have anti-malware software on 100% of desktops and laptops, yet only 56% of survey respondents take the same measures on even some of their mobile devices.

>> Review the possibility of maintaining an internal app store.

>> Set a policy for use of public app stores like iTunes or the Android Market. Policies regarding apps will vary between personally and corporate-owned devices, but it's perfectly reasonable to set and enforce standards.

Finally, address mobility in your security awareness training. Include instruction on why authentication, passwords, and encryption are important and how they benefit the employee as well as the business. Explain the risks of public hotspots and app stores. Connect the dots between MDM and ensuring compliance.

There's no doubt BYOD is off and running, yet security and management are not keeping pace. That gap creates a serious exposure for enterprises, and one that CIOs should be looking to get their arms around. Unfortunately, the lack of a widely published mobile security failure has lulled executives into thinking that the situation is well in hand. Nothing could be further from the truth. 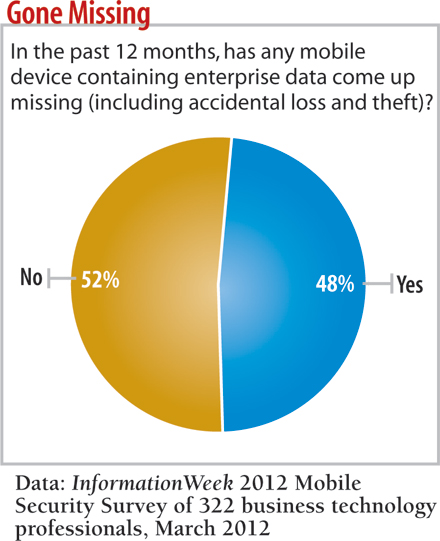 Michael Finneran is an independent consultant and industry analyst specializing in wireless technologies. Write to us at [email protected].