The company put the spotlight on innovation with the stylish mobile PCs, a gaming system, a touchscreen videophone, and a wristband computer.
Antone Gonsalves
Contributor
January 07, 2010 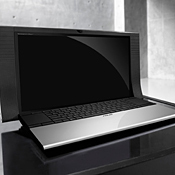 Asus NX90 ICEpower Laptop
Asus has introduced two designer laptops as part of a push by the computer maker to build a reputation for innovation.

The computer maker plans to showcase the Bang & Olufsen-designed ICEpower notebook and the Eee PC netbook from New York designer Karim Rashid at the International Consumer Electronics Show in Las Vegas, which runs Thursday through Sunday.

Also, on display at a pre-CES event Tuesday was a new gaming system, a videophone, and a prototype of a wristband computer. Billed as the company's "latest innovations," Asus did not disclose availability or pricing for any of the products.

The Asus NX90 ICEpower laptop is the creation of B&O chief designer David Lewis. The system features a polished aluminum exterior and palm rest and a matte-black keyboard with a touchpad on each side. The dual touchpads work in concert with the system's "rotation desktop" software to provide users with an "intuitive DJ-like control," according to Asus. The laptop has two integrated speakers, one on each side of the display.

Bang & Olufsen is a Danish company that designs and manufacturers audio products, television sets, and telephones. The 85-year-old company is known for its unique design in consumer electronics.

Asus also showed off the Eee PC Seashell designed by Rashid, whose artwork is on display at the San Francisco Museum of Modern Art. The stylish, slim laptop is available in hot pink or coffee brown and is made of "soft-to-the-touch materials that will redefine how people perceive netbooks," Asus said.

The wristband computer is one of what Asus calls its Waveface concept products. The device, called the Waveface Ultra, straps to a person's wrist for easy access to information. The device's display can be snapped flat to enlarge the viewing area.