The U.S. leads the world in restricting the personal information that people can access on their Facebook, Twitter, and other pages, reports Unisys study.
Mathew J. Schwartz
Contributor
October 27, 2010 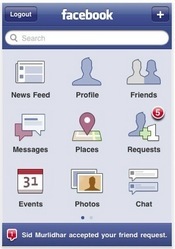 (click image for larger view)
Best Mobile Apps For Busy Professionals
Social networking users in the United States, more than any other country, limit the personal information they post, and set privacy settings to restrict who can view their information.

That finding comes from the recently released Unisys Security Index, a bi-annual study conducted since 2007 by market research company Lieberman Research Group, which surveyed 10,575 consumers in 11 countries, including 1,000 in the United States.

Why do U.S. residents restrict more of their information? "It could be because we have better reporting on social media issues here, because Facebook is a U.S.-based company," said Patricia Titus, global chief information security officer at Unisys.

The survey also found that 61% of Americans believe that the president should have the authority to take control of, or shut down, portions of the Internet in response to a malicious cybersecurity attack launched by a foreign government.

Looking at all countries studied, Brazil emerged as the country most concerned with overall security, while the Netherlands was least concerned. Across all 11 countries, meanwhile, consumers most worry, security-wise, about bank card fraud.

Interestingly, Americans' computer security worries continue to decline. "The survey showed that there's a downward trend in people's overall view of security," encompassing Internet, personal, national, and financial security, said Titus. Since the bi-annual study began in 2007, she said, "this is the lowest we've seen in terms of people's concern in the four areas."

In particular, while 73% of U.S. respondents said that they regularly update their antivirus software, 34% said they're "not concerned" about viruses or spam. In addition, consumers who were seriously concerned about the security of online banking and shopping dropped from 43% in February 2010 to 34% in August 2010.

But Titus warned that consumers should address some of the security habits revealed by the survey. "It appears that not many people -- only 37% -- use a password on their mobile devices," she said. "That indicates that mobile devices haven't made the leap to the type of protection that we're seeing on other types of devices, like workstations. It's interesting, because you'd think people would be more concerned about the mobile device, because of the processing power that's available to them."