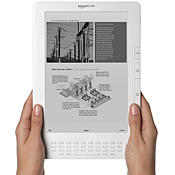 Amazon Kindle DX
Amazon on Wednesday introduced a new version of the Kindle DX with global wireless, making it possible for people in more than 100 countries to download electronic books, newspapers and magazines.

The Kindle DX, which sports a 9.7-inch diagonal, black-and-white screen, is Amazon's largest e-book reader. The online retailer has been shipping a global wireless version of its six-inch Kindle since October 2009.

The new Kindle DX is available for pre-order and is scheduled to start shipping Jan. 19. The device costs $489.

The addition of global wireless is no surprise given how it broadens Amazon's customer base to countries outside of the United States. The retailer is releasing the new Kindle DX model as competition appears to be heating up among makers of large-screen e-readers, as opposed to devices with the more typical six-inch display.

On Monday, Skiff introduced an e-reader with an 11.5-inch flexible touchscreen that the company claims is the highest resolution e-reader display to date. The device uses Sprint as it exclusive wireless provider.

The Skiff Reader features an e-paper display based on a thin, flexible sheet of stainless-steel foil developed by LG Display. Other e-reader screens use a rigid screen design. The display has a resolution of 1200 x 1600 pixels, compared to the Kindle DX's 1200 x 824 pixels.

However, Skiff has yet to announce deals with publishers or to provide a firm release date, other than this year. The company also hasn't released a price. The new e-reader is being showcased at the International Consumer Electronics Show in Las Vegas, Nev., this week.

Also on the horizon is Plastic Logic's QUE, which has a 10-inch diagonal display. The e-reader supports PowerPoint and Excel documents and is targeted at business professionals. The device will also be on display at CES. Plastic Logic hasn't provide pricing or a firm date for when the product will be available.

In the meantime, Amazon remains the leader in the e-reader market. The online retailer self-reported record sales in November. Forrester Research estimates 3 million units were sold in 2009 in the United States and expects sales this year to reach 10 million units.