Packet sniffing, drones and cat memes. And the winning caption is....

There’s no shortage of dog lovers (and cat puns) in the Dark Reading community! This month’s cartoon contest entries – 81 in all -- offered more than a few laugh-out-loud moments for the 2,500+ readers who kept tabs on the captions as they poured in.

And so, without further ado, the winning caption... 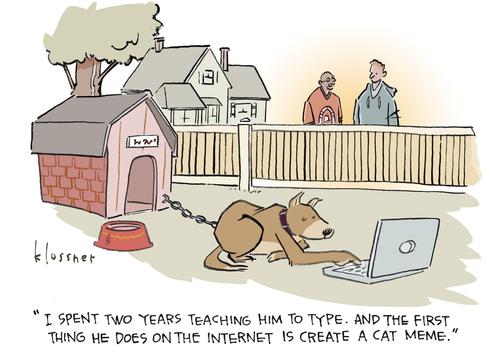 First-prize winner ioshield takes home a $25 Amazon gift card and his much-deserved moment of fame in the final version of the cartoon by John Klossner, who helped judge the contest along with the Dark Reading editorial team: Tim Wilson, Kelly Jackson Higgins, Sara Peters, and yours truly.

The competition was stiff! We also awarded two honorable mentions (and $10 Amazon cards) to Stephen McCallister, (aka smccallister), of Stephen R. McCallister HIT Consulting, for:

"He's on Facebook again, no one's ever going to convince him 'Who Let the Dogs Out' is a rhetorical question.”

"We got him as a security dog, and he's surprisingly good at it, though we would still prefer him to bark at intruders as opposed to sending them menacing emails."

Thanks again to everyone who entered the contest. If you haven’t yet read all the captions, be sure to check them out today.

Marilyn has been covering technology for business, government, and consumer audiences for over 20 years. Prior to joining UBM, Marilyn worked for nine years as editorial director at TechTarget Inc., where she launched six Websites for IT managers and administrators supporting ... View Full Bio

Congrats to the winners, some nice honourable mentions too. Can we see more of these in future? I like the idea of the community contributing to these captions.
Reply  |  Post Message  |  Messages List  |  Start a Board

Ha!  Thanks for the honorable mention Joe!  That's my life.  Always one day late.
Reply  |  Post Message  |  Messages List  |  Start a Board

Congratulations to the winners!  A worthy choice indeed for first place!  :)

FWIW, this entry came in after the deadline, but I think an honorable mention is in order for user robshi's "Don't worry.  His bark is worse than his byte."

Webinar Archives
White Papers
What Elite Threat Hunters See That Others Miss: Case Study
How to Optimize Your Windows 10 Defense Strategy
The Dark Side of SD-WAN
Top Threats to Cloud Computing: The Egregious 11
Cybersecurity Report Card

Bug Report
Enterprise Vulnerabilities
From DHS/US-CERT's National Vulnerability Database CVE-2021-3493PUBLISHED: 2021-04-17
The overlayfs implementation in the linux kernel did not properly validate with respect to user namespaces the setting of file capabilities on files in an underlying file system. Due to the combination of unprivileged user namespaces along with a patch carried in the Ubuntu kernel to allow unprivile...
CVE-2021-3492PUBLISHED: 2021-04-17
Shiftfs, an out-of-tree stacking file system included in Ubuntu Linux kernels, did not properly handle faults occurring during copy_from_user() correctly. These could lead to either a double-free situation or memory not being freed at all. An attacker could use this to cause a denial of service (ker...
CVE-2020-2509PUBLISHED: 2021-04-17
A command injection vulnerability has been reported to affect QTS and QuTS hero. If exploited, this vulnerability allows attackers to execute arbitrary commands in a compromised application. We have already fixed this vulnerability in the following versions: QTS 4.5.2.1566 Build 20210202 and later Q...
CVE-2020-36195PUBLISHED: 2021-04-17
An SQL injection vulnerability has been reported to affect QNAP NAS running Multimedia Console or the Media Streaming add-on. If exploited, the vulnerability allows remote attackers to obtain application information. QNAP has already fixed this vulnerability in the following versions of Multimedia C...
CVE-2021-29445PUBLISHED: 2021-04-16
jose-node-esm-runtime is an npm package which provides a number of cryptographic functions. In versions prior to 3.11.4 the AES_CBC_HMAC_SHA2 Algorithm (A128CBC-HS256, A192CBC-HS384, A256CBC-HS512) decryption would always execute both HMAC tag verification and CBC decryption, if either failed `JWEDe...