A few apparent pranks, practice DDoS attacks, and other mischievous activities were spotted on the Black Hat USA wireless network in Las Vegas this month.

Missing: One wireless access point that had been mounted on a hand-crafted stand built from PVC pipe purchased at a home improvement store.

Last seen: At Black Hat USA in Las Vegas in the halls of the Mandalay Bay Conference Center. 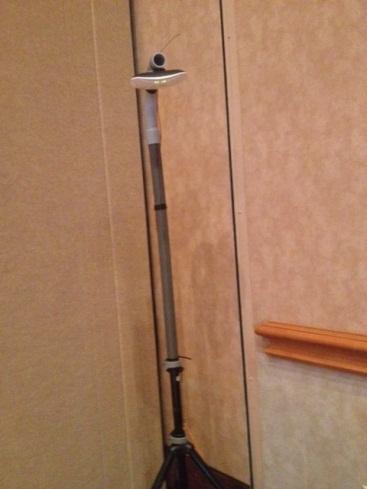 Have you seen this wireless access point? An AP just like this one was pilfered from the Black Hat USA show network.

Whoever ripped off the wireless AP from the Black Hat USA show network really couldn't do much with it without an Aruba controller to go along with it. Even so, by now it may be sitting on a WLAN somewhere or up for sale on eBay.

Jon Green, CTO of Aruba Government Solutions, who headed up the NOC team that ran the onsite wireless LAN for the Black Hat conference, told me that during the show he had seen someone trying to install a sniffer on another of the show network's APs in an apparent attempt to monitor traffic going through it.

The now-missing AP later disappeared altogether and has not been found. The culprits left behind the homemade PVC mounting stand, though.

"We never found the stolen AP. We really have no choice but to write it off at this point," Green said. "Given the nature of our architecture, there's nothing an attacker could get out of the AP that would provide any value, however. Best we can do is work with the conference center next year to improve physical security, or maybe we need to keep APs out of the hallways at night."

Green and his team also battled a few denial-of-service attacks on the show network, but none that lasted for very long. The DDoSes were more about experimentation than network takedown, they say. "There were also quite a few impersonating APs, meaning someone trying to advertise the BlackHat-2014 network from their own APs," Green said. "Those we were able to block fairly effectively, at least in the places where we had WiFi coverage."

The Black Hat WLAN offered both a WPA2-based secure network for attendees and an open, unsecured network that's mostly used for test-driving hacking tools and new skills acquired in Black Hat training sessions -- and maybe a for a little bad behavior here and there.

Overall, the NOC team didn't have to fend off any major security incidents. Among the final stats: The network traffic peaked at 1,150 concurrent users; the team saw 1,000 concurrent MiFi devices; and 45% of users opted for the secure access network option.

Lessons learned from this year's show network: "People have gotten wiser about certificate issues lately, so we'll be making some improvements in how we provide the secure network," Green said.