As Bitcoin has become more popular, the temptation for rogue employees to use company equipment and hardware to mine cryptocurrency has also increased. Here's what security pros need to know.

Bitcoin is now trading at roughly a third of its mid-December peak of nearly $20,000, but it's unlikely to stop a growing number of employees from engaging in sketchy crypto-mining behavior while at work.

For enterprises, the impact goes beyond the proverbial theft of office supplies or using the corporate printers for personal business. This rogue activity can not only slow down processing speed on corporate computers and servers but also can potentially jack-up electricity bills by the thousands of dollars and load crypto mining tools with vulnerabilities onto the network.

"Say I wanted to host crypto mining software on my corporate servers. In a company with good security practice, each piece of software would be vetted and allowed or not allowed based on it," Rick McElroy, security strategist for Carbon Black, told Security Now. "In this case [of a rogue employee], who does the vetting? Who would have to open the firewalls to get it to work?" 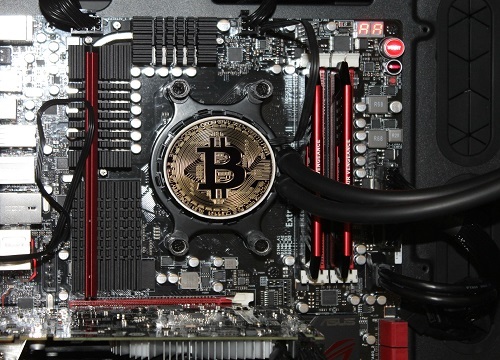 That concern is also shared by Johannes Ullrich, dean of research for SANS Technology Institute.

Moonlighting at work
Since the emergence of Bitcoin in 2009, a number of organizations have been hit with rogue employees mining for cryptocurrency using company computers, servers and even data centers.

An Australian Broadcasting Corp. worker with high-level IT access privileges loaded Bitcoin mining software onto the ABC Grandstand Sports website servers in 2011, according to a report in Delimiter.

The broadcaster detected the crypto-mining software within 30 minutes and removed it, but it noted it wasn't clear whether any visitors to its popular Grandstand website may have been affected by the cryptocurrency mining software, Delimiter reported. ABC placed the rogue employee on tight supervision and limited access to all of ABC's production systems, the report noted.

The Department of Education (DOE) for New York City faced two separate cases of employees attempting to mine Bitcoin using company equipment. One case occurred in 2013 and the other in 2014. While the first DOE employee received a warning, the second one received a penalty of losing four days of his annual leave, a $611 value, for misusing the agency's resources and time.

The penalty for a communications analyst for the Federal Reserve System was much steeper, however.

Nicholas Berthaume plead guilty to installing Bitcoin mining software on a Federal Reserve server and altering some of the security safeguards to remotely access the server from home. He received a $5,000 fine and 12 months of probation, the Office of the Inspector General (OIG) for the Federal Reserve System Board of Governors announced last year.

But perhaps the most egregious case involved a European bank in 2014, said Dave Palmer, director of technology for Darktrace.

Upon working with the bank, Darktrace noticed extensive Bitcoin mining at the institution's datacenter. It worked with the bank's IT team and as the group followed the datacenter's cables to the servers mining bitcoin, it did not lead to the server racks but instead snaked below the center's subfloor. 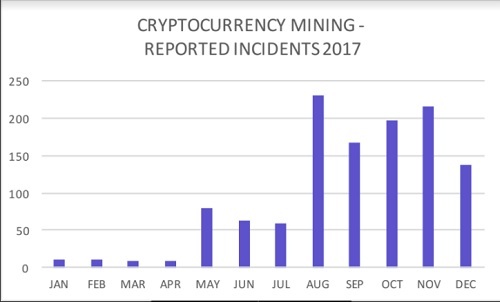 There, under the subfloor tiles, were more than a dozen pilfered servers cranking away 24/7 mining Bitcoin in the air-conditioned data center, Palmer recalled.

"Most employees who run crypto-mining software on company computers will use their work desktop or laptop, but these were powerful datacenter-class servers that were used," he exclaimed. He also noted that the rogue employee, or employees, managed to siphon off some of the servers as they were delivered to the center, so they were not registered among the bank's assets when the cryptomining kicked off.

In another unusual case, Palmer said a systems administrator with a US law firm relied on his co-workers to frequently visit various sites on the company's intranet to drive his cryptocurrency mining. He used Coinhive, a service that allows relatively novice techies to cut and paste five lines of JavaScript into a website, which piggybacks on the processing power of users' computers while they visit the infected site.

The rogue employee knew the law firm's public website would not generate enough visitors to make the Coinhive mining service worth his effort, so that's when he turned to the company's intranet, Palmer explained.

"It was a smart move for misbehavior," Palmer said. Darktrace uncovered his misdeeds after noticing hundreds of employees altering their behavior and visiting a distant Coinhive server.

Rogue employees' crypto-mining numbers rising
Following its launch in 2013, Darktrace began to come across customers who had crypto-mining software on their systems.

Between 2014 to mid-2017, Darktrace would come across an average of five to ten customers per month who had crypto-mining software on their systems, Palmer said.

"At a gut-level sense, it was primarily being done by insiders," Palmer speculated.

Then in May, the monthly average jumped to 80 clients with crypto-miners on their systems and by the end of the year it had reached as high as 220 per month, Palmer said.

Although he attributes the rapid rise in illicit cryptomining to cybercriminals jumping into the game with their cryptomining botnets, he believes rouge inside employees account for 25% of the larger pie.

How to Reign In Rogue Employees
"Companies need to check on their IT teams and even their security teams within IT," Palmer advised. "If you have a reasonably sized organization, you may want to think about dividing up responsibilities to avoid collusion."

First, companies should develop a clear policy that regulates the use of company computers for personal use and remind employees of this policy. Include explicit policy language that it also covers cryptocurrency mining, as well.

"Enterprises should also try to look for systems running mining software. Most of the time, malicious actors, not employees, are installing it, so this will help detect these breaches as well as dishonest insiders," Ullrich says, adding there are a couple of ways to detect this activity.

— Dawn Kawamoto is an award-winning technology and business journalist, whose work has appeared in CNET's News.com, Dark Reading, TheStreet.com, AOL's DailyFinance and The Motley Fool.