At Gartner's Symposium/ITXPO, analysts have come up with the term 'ContinuousNEXT' to show how digital transformation is evolving. However, businesses need to address concerns over privacy and AI.

ORLANDO, Fla. -- Gartner Symposium/ITXPO -- When it comes to digital transformation, enterprises of all sizes are trying to keep up with the rapid change of pace, as well as the executive and boardroom pressure that this mindset requires.

Gartner has come up with its own term for this, which the firm calls "ContinuousNEXT," which is comprised of five different strategies that CIOs and other IT executives should consider. These include:

However, for security pros and CISOs, the notion of privacy is particularly significant since data carries so much currency right now in the enterprise, and the misuse of this information can lead to reputation damage or financial ruin.

When presenting this new research at the start of the show here on October 15, Mike Harris, an executive vice president with Gartner, noted that within the last week, Google decided to shut down its Google+ social media platform following stories about a potential data breach. (See Senators Demand More Information on Google+ Vulnerability.) 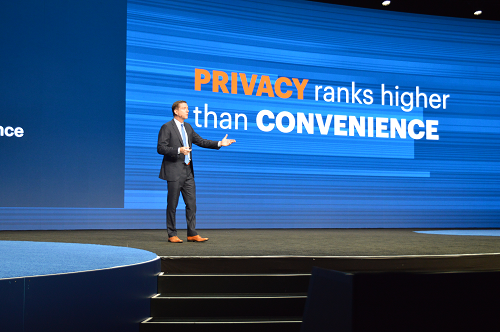 "If you don't successfully manage and master privacy, your entire digital transformation is at risk," Harris said to the 9,000 CIOs and other IT executive gathered here during the kick-off keynote. "Increasingly, trust and privacy are power, and that power is shifting. The public view of privacy has now flipped. There's rising skepticism in consumers. For the first time, a sizable group of consumers and employees are not willing to give up security, safety and piece of mind for convenience."

In addition, Harris noted that about 73% of the marketing organizations that Gartner has surveyed are changing the way they look at customer data due to new regulations. These not only include the European Union's General Data Protection Regulation (GDPR), but also new laws that states are passing in the US, and the potential for China to create its own data privacy and compliance rules. (See California's CCPA Law: Why CISOs Need to Take Heed.)

Harris noted that since GDPR violations carry a fine that could equal about 4% of a company's global revenue, privacy issues has now become a board-level concern since so much of an enterprise's financial health is at stake.

However, less than half of organizations have controls in place to ensure compliance with often competing regulations. One way to help counteract some of this in investment in new technologies, such as blockchain. (See Blockchain & Cryptocurrency Becoming Greater Security Concerns.)

It also leaves the door open for even more cutting-edge technologies, especially what Gartner calls the next step in artificial intelligence: "Augmented intelligence." This boils down to using AI systems alongside human employees to create better outcomes. Instead of a future shaped by robots and algorithms doing all the work, machine learning and AI help employees make better decisions. (See Cybersecurity AI: Addressing the 'Artificial' Talent Shortage .)

One reason for this is that by 2021 Gartner analysts expect AI to answer questions better than humans.

"While the most repetitive jobs can be displaced, people are adapting," Harris said. "Companies are expanding their capabilities and creating augmented intelligence -- putting works side-by-side with advanced AI systems, processes and robotics, and along the way those jobs become more impactful and useful to customers and citizens. Companies adopting AI today, are letting works keep their jobs, but in a more meaningful way."