Kirstjen Nielsen, the secretary of the US Department of Homeland Security, told this week's RSA Conference that cybercrime will reach $6 trillion annually within the next three years, and that the federal government and private business need to step up their game.

SAN FRANCISCO – Cybercrime is expected to soar to a $6 trillion annual enterprise in the next three years -- that's the equivalent of about 10% of the world's economy -- the secretary of the US Department of Homeland Security, Kirstjen Nielsen, told this week's RSA Conference during an opening keynote.

As cybercrime increases over the next three years, private business and the federal government need to step up their game and learn to cooperate more, especially as attacks as WannaCry and NotPetya multiply. (See Cybercrime Is North Korea's Biggest Threat.)

"Security used to be a problem reserved for the IT department," Nielsen, who cited the $6 trillion figure from a study conducted by Cybersecurity Ventures, said during her April 17 address. "Now, it is a real-life daily concern. Every facet of our society is now being targeted at every level. Simply put, cybersecurity is now everyone's problem. It's affecting our lives, our livelihoods, and our way of life." 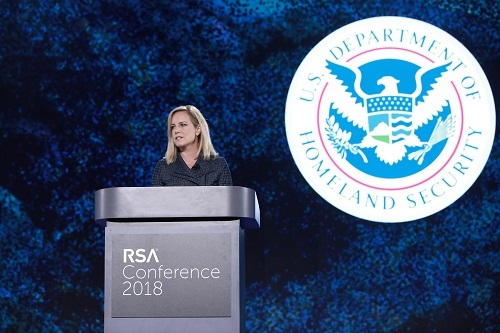 What's complicating matters, Nielsen said, is that different attackers want different things. Some look to steal money and personal data for financial gain. Other are involved in long-term espionage schemes. Another group might want to target critical infrastructure to cause havoc. (See FBI & DHS Accuse Russia of Hacking Critical Infrastructure.)

"Our response to the threat environment is complicated by the fact that different actors have different objectives," Nielsen added.

In the coming months, Nielsen said that DHS plans to release its own cybersecurity strategy that will look to increase cooporation between governments and private industry. In a broad outline, she said that the plan would include:

While not offering much in the way of specifics during her talk, Nielsen outlined five important, but fairly broad, strategies about this plan that DHS plans to emphasize when the rollout is complete.

Nielsen closed with a call to action:

Editor's note: This article was updated to clarify the source of the $6 trillion figure that Nielsen cited during her talk.