In a surprise outcome, the education sector rises to the top of a SecurityScorecard assessment for its ability to protect data assets despite connecting thousands of unsecured devices and even some determined student hackers.

When it comes to cybersecurity, the education sector faces unique challenges, starting with the hundreds, often thousands, of unsecured student devices that live on its networks.

Unlike some of their corporate brethren, education CISOs don't have large budgets that grow as risk does, nor can they conduct mandatory training sessions to push best practices. In fact, many institutions have a unique threat: a small army of computer science students eager to practice hacking skills.

So it was a bit of a surprise when private risk-assessment and monitoring company SecurityScorecard ran an analysis of security performance over a six-month period to rank the performance of Chief Information Security Officers, that education proved to be the industry sector with the greatest improvement in overall cybersecurity health. 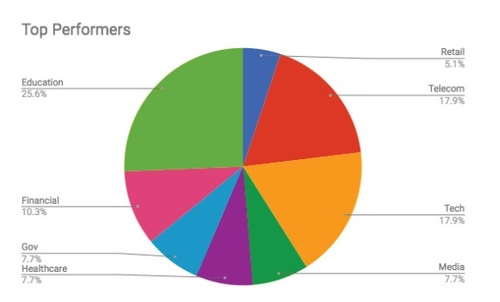 "I was surprised -- but it was a good kind of surprise," said Sam Kassoumeh, COO and co-­founder of SecurityScorecard and a former CISO. "Cybersecurity is especially challenging in the education [sector] because there is a disproportionate amount of investment into security versus the threat landscape. In the education, there is often one small technology group doing all corporate IT plus security."

That contrasts with big financial services groups where entire floors of corporate HQ is devoted to a robust security team, he added.

The BYOD nature of the education sector means those CISOs "have no controls in place set by the university, unlike a corporation that is provisioning the machines, the computers with a standard operating system" or adding passcodes to lock smartphones, Kassoumeh said. "Universities don't have that. Every machine connecting to a university network can be affected by malware."

Where education CISOs have been able to succeed, he notes, "is in building controls around specific assets that would most likely come under attack."

"They have managed to segregate or segment the network to keep the sensitive crown jewels such as infrastructure systems that managed scheduling and grades separate versus networks that connect the dorms," Kassoumeh said.

The education CISOs that have succeeded have started with a realistic assessment of where they are and what they have as resources, he notes.

"You have to work with what you've got -- are they going to go and provision a machine for each university student, probably not, because it's not really in the budget to do that," Kassoumeh said. "They have to accept challenge at hand, which is we have thousands and thousands of untrusted devices on the network. And then design a system that can handle and support this type of landscape."

What that has required is a careful understanding of where sensitive data lives -- and there is a lot more of it these days with required testing, online grading and more -- and then an assessment of where the risks to that data exist as well.

Education CISOs "are not necessarily trying to change the world but they are devising a strategy that accepts a large surface area of insecure devices," he said. "They are building an inside-out type of infrastructure, where they build defenses around the systems that are sensitive and build walls and segregators around that data and then and on the other side of the wall they have the landscape where they allow anyone to connect. By keeping a hard segregation of duties and networks and creating DMZs and a separate infrastructure, they can avoid that risk of somebody being on the student network and them jumping over to the more secure network. You see universities doing that incredibly well."

That can include even creating a segment that allows for the "mischievous" comp sci majors to develop their own hacker tools, without putting bigger networks at risk, Kassoumeh said.

Telecom and technology were to other top-rated segments. The SecurityScorecard also named its 15 top performing CISOs and one -- Edward Kelly, Maricopa Community College -- was from the education sector.

Kassoumeh notes that the Top 15 list is intended to recognize CISOs, who normally work anonymously until there's a breach for which they are blamed, and also to create a little friendly competition in the field. You can read the entire report on the firms's website.