The New York Times reports that President Donald Trump uses up to three different iPhones and that his habits have left his calls open to spying from China and Russia.

President Donald Trump uses up to three different iPhones during the course of the day, and his calling and security habits are so lax that China and Russian spies routinely listen in on his calls to friends and supporters, according to detailed report in the New York Times.

The report claims that Trump uses at least two different iPhones that have been modified by the National Security Agency, but that he insists on using a third iPhone to call his friends and other acquaintances since the smartphone still allows him to store contact information.

The story, published late Wednesday, October 24, is based on anonymous sources who spoke to the Times.

In the story, Times reporters point out that China is taking advantage of Trump's less-than-secure communications to eavesdrop on various conversations and then use that to craft government policy. Right now, the US and China are in the middle of a trade war, and China's leaders are trying to determine how they can influence US decision making. 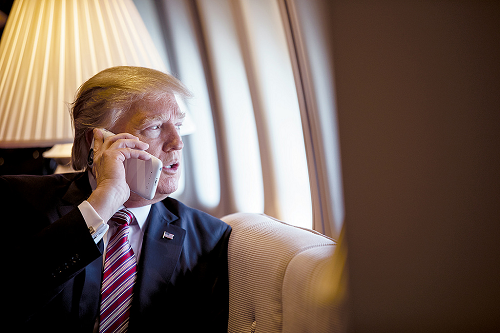 Russia also appears to have access to these conversations between Trump and his friends, although the report indicates that the country is not running a sophisticated operation compared to the one the Chinese government is conducting.

If true, the report seems to indicate that the NSA and other federal government agencies have a massive BYOD security fail on their hands. As the Times points out, while Trump does not use an unsecured wireless network, the "security of the device ultimately depends on the user, and protecting the president's phones has sometimes proved difficult."

The so-called experts on Trump over at the New York Times wrote a long and boring article on my cellphone usage that is so incorrect I do not have time here to correct it. I only use Government Phones, and have only one seldom used government cell phone. Story is soooo wrong!

While the NSA has modified two of the three iPhones, Trump has been warned that cellular communications are not safe and the president has been urged to use the secure landline located in his office.

The Times story does note that the NSA did manage to persuade Trump to stop using his pre-presidential Android device, since it's considered less secure. However, the president still insists on balancing three different iPhone throughout the day.

While the story is masterclass in how not to secure end devices within an enterprise -- not to mention the havoc an insider threat can cause -- some have found some humor in the details. For example, the Chinse embassy denied the story in a Tweet, but took aim at the Trump administration's treatment of Huawei, which has run into several problems in the US.

China spokeswomen Hua Chunying on the NYT Trump iPhone tapping story: "If they are very worried about iPhones being tapped, they can use Huawei." pic.twitter.com/lZ48beuA7e

If there's a bright spot in the Times story, it's that the White House security and IT staff can rest easy when it comes to phishing campaigns that target Trump: The president doesn't use email.

Bug Report
Enterprise Vulnerabilities
From DHS/US-CERT's National Vulnerability Database CVE-2022-31099PUBLISHED: 2022-06-27
rulex is a new, portable, regular expression language. When parsing untrusted rulex expressions, the stack may overflow, possibly enabling a Denial of Service attack. This happens when parsing an expression with several hundred levels of nesting, causing the process to abort immediately. This is a s...
CVE-2022-31101PUBLISHED: 2022-06-27
prestashop/blockwishlist is a prestashop extension which adds a block containing the customer's wishlists. In affected versions an authenticated customer can perform SQL injection. This issue is fixed in version 2.1.1. Users are advised to upgrade. There are no known workarounds for this issue.
CVE-2022-31103PUBLISHED: 2022-06-27
lettersanitizer is a DOM-based HTML email sanitizer for in-browser email rendering. All versions of lettersanitizer below 1.0.2 are affected by a denial of service issue when processing a CSS at-rule `@keyframes`. This package is depended on by [react-letter](https://github.com/mat-sz/react-letter),...
CVE-2022-32994PUBLISHED: 2022-06-27
Halo CMS v1.5.3 was discovered to contain an arbitrary file upload vulnerability via the component /api/admin/attachments/upload.
CVE-2022-32995PUBLISHED: 2022-06-27
Halo CMS v1.5.3 was discovered to contain a Server-Side Request Forgery (SSRF) via the template remote download function.