Trend Micro has picked up on a new exploit dubbed 'Novidade,' which targets small business and home routers and changes their DNS settings to redirect the traffic as part of an attack.

A new exploit spotted by Trend Micro is designed to target small home and office (SOHO) routers, as well as consumer-grade home routers, by changing their internal domain name service (DNS) setting to one that is determined by the attacker.

Once the malicious DNS has been installed, the router becomes part of a "pharming" attack. This kind of attack will redirect website traffic from all the devices connected to the same router by resolving targeted domains to the IP address of their server.

Trend named the exploit kit Novidade -- "novelty" in Portuguese -- due to the title string "Novidade!" on the web pages of all the current variants of it. 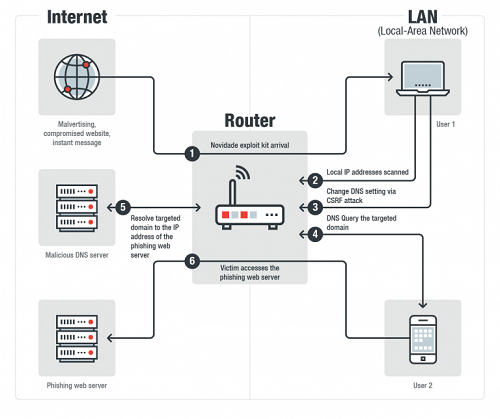 Novidade was found to be delivered through differing methods include malvertising, compromised website injection, and instant messengers. The user needs to click on a link to activate the first steps of the attack.

The first thing the malicious URL in the link does is to try HTTP requests to common local IP address that are mostly used by routers. Should a connection be successfully established, Novidade will query the detected IP address to download a corresponding exploit payload, encoded in Base64. It will then try and log into the router with a set of default account names and passwords, after which a CSRF attack is attempted that can actually change the DNS settings.

After that change, if -- for example -- a user tries to connect to a targeted bank domain the injected DNS server could resolve the request to an IP address that hosts a fake banking website.

Trend researchers has found three variants of Novidade, and they all have similar attack operations. The first version was the most basic of the group, and was seen in the wild in August 2017.

The second variant adds a runtime JavaScript obfuscator which will make the landing page take different forms depending on the attack.

Finally, Trend saw that the third variant was still retaining the JavaScript obfuscator to refine the code on the landing page. At the same time, however, it added a new feature to retrieve the victim's local IP address by making requests to STUN servers with WebRTC.

Also, the third variant embedded a shortened URL link on the Novidade landing page. This is not used for redirection efforts but tracks attack statistics.

In its report, Trend researchers identify the following list of routers, which they admit is not all inclusive, that are being targeted by the attack.

Trend recommends changing the router's default IP address, as well as disabling remote access features, which will minimize the chances for an attacker to externally manipulate the device.