Berkelely, Calif. - The Olympic Games in the coming years are likely to face far more serious cyberattacks and ones that will be more difficult to detect, according to a report released this week by the UC Berkeley Center for Long-Term Cybersecurity (CLTC).

And although the Summer Olympics don't roll into Los Angeles until 2028, US officials are already considering the cybersecurity threats for the high-profile event. The Los Angeles Organizing Committee for the 2028 Olympic Games provided support for the CLTC report.

The concern is understandable. During the 2008 Beijing Olympics, security officials fielded 11 million to 12 million daily alerts, with roughly a half dozen falling into the imminent threat category, according to the report. And in the 2012 Summer Olympics in London, six major security incidents - five of which involved DDoS-related attacks - were brought to the attention of the event's CIO. Last year, at the conclusion of the Rio Olympic Games, Russian hackers pilfered medical records of athletes from the World Anti-Doping Agency.

While most of the threats that have emerged at the Olympics have largely fallen into the categories of reputational harm and financial harm. Cybercriminals ran ticket scams, manipulated websites, pilfered payment information, and attacked maintenance systems, but even more serious attacks are likely in the future, said Betsy Cooper, CLTC executive director, who presented the findings during a panel session here at the University of California at Berkeley this week.

While most of the past attacks on sporting events center on IT systems at stadiums and ticket sales and operations, future cyberattacks at the Olympics may occur in eight key areas, says Cooper.

"I was surprised to learn there are instances where human decisions are overridden by technology," Cooper said, in reference to a growing reliance on using technology to make the first call in a sporting event, rather than a human referee.

"Increasingly technology is being used to assist with referee calls," Cooper said, noting the potential of hackers breaking into such systems and altering the outcome of the scoring systems. "With more automation, there are more potential vectors of attack." 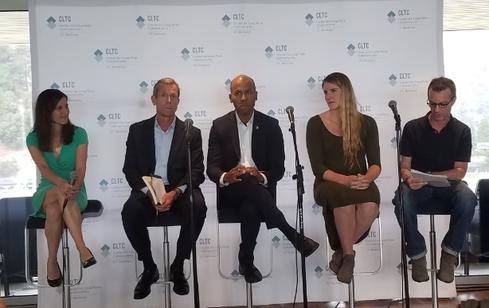 These type of attacks not only have the potential to alter the outcome of which athletes become gold-medal winners at the Olympics, but also detection of this type of hacking may be more difficult to detect, she added.

If an electronic referee is called into action multiple times over the course of an athlete's performance, a hacker could occasionally slip in to alter the results just enough to tip the win in the target's favor.

Athletes could also face physical harm if cybercriminals were to tamper with automated food systems that dispense such items as protein drinks that have specific nutrients doled out for each athlete. An Olympic swimmer who is allergic to gluten, for example, could get a protein drink laced with gluten after a cybercriminal, or nation-state, seeks to take that athlete out of the games, according to Cooper.

Such attackers are likely to be cybercriminals looking to make money by betting on certain teams or players and altering the results to win, or a nation-state or patriotic national wanting to rig the game so their home team wins, said Doug Arnot, chairman of the Broadstone Group and a panelist at the Olympics cybersecurity panel.

Missy Franklin, a five-time Olympic medalist swimmer and panel member, said as an athlete she is first and foremost worried about physical security, and then secondly, cybersecurity threats that can alter the outcome of a game.

"It's intimidating and threatening," Franklin said, noting technology is used to determine the swimmer who touches the wall first when deciding the outcome of a game.

That said, however, Franklin noted that human referees are also used to make calls on the way a swimmer makes a lap turn or whether they start the race prematurely.

CLTC made several recommendations to minimize the attack surface at the Olympic Games. One is to balance opportunity and risk by questioning the need to add new technology at the risk of enlarging the attack surface.

Another suggestion is to have a human as a backup to any technology, and to give human referees the ability to verify that the technology used in the games is producing the correct results.

Cybersecurity training on such issues as phishing to social engineering should be provided to all Olympic staff members and officials, according to the report.