The lightweight device turns the N8 smartphone and other compatible Nokia mobile devices into a portable television without a 3G or Wi-Fi connection.
Esther Shein
Contributor
September 10, 2010 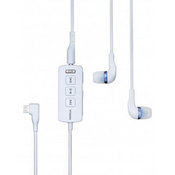 (click image for larger view)
Nokia Mobile TV Headset
For those who can't get enough TV time, Nokia has just launched a Mobile TV headset, which lets users go beyond streaming audio and video and turn a compatible Nokia mobile device into a portable television.

Wherever Digital Video Broadband-Handheld (DVB-H) is available, the Mobile TV headset will let users watch programs on their Nokia devices and still receive voice calls while watching and without interruption, the Finnish company said. The headset works with the upcoming Nokia N8 and other Symbian^3 devices that have the USB On-the-Go feature by connecting to a standard microUSB port, and doesn't require a 3G or Wi-Fi connection or subscription plan. The device is easier on the battery than other Web TV headsets, Nokia claims.

Compatible devices use a Mobile TV app that comes either pre-installed or can be downloaded from the Ovi Store.

The device also features keys to change channels and music controls. It is 92.4 x 45 x 9.8 mm and weighs about 2 ounces. It can operate for up to 12 hours and comes with a battery and travel charger. It is expected to cost around $50 in the United States and will ship before the end of the year.

DVB-H is one of three primary mobile TV formats and was endorsed by the European Union as the preferred technology for terrestrial mobile broadcasting in 2008. In the United States, where DVB-H has not yet taken off, its major competitors are Qualcomm's MediaFlo System, the MBMS mobile TV standard based on 3G cellular, and the ATSC M/H format.

The one caveat is that DVB-H, although expanding, still doesn't work seamlessly in many countries, a company blog notes. "Licensing issues and lack of frequency availability have stalled many projects, though there do appear to be working services in the Netherlands, Russia, New Delhi, and Helsinki, for example. Check carefully with local dealers before you buy,'' the company said in a statement.