How organized crime rings are amassing bot armies for password-cracking attacks on personal accounts in retail, financial, gaming, and other consumer-facing services.

Account takeover attacks (ATO) are a very lucrative business for cybercriminals. They fuel the underground fraud-as-a-service economy with compromised accounts, which are sold or exchanged for a variety of downstream attacks involving retailers, financial services, reward programs, mobile games, and other consumer-facing services. Based on the number of data breaches that took place in 2015, it’s likely that the stolen credentials will be used heavily toward ATO attacks in 2016.

What makes ATO attacks so dangerous is that they target accounts that are created by real users. Unlike mass-registered fake accounts, they contain valuable information such as financial data, and their activities are less likely to raise the suspicion of security solutions. According to a recent Trend Micro report, a single compromised account is worth upward of $3 each on the underground market. That’s more than 17 times the price of a stolen credit card number, which is only 22 cents.

Phishing: Attackers can assume a compromised user’s identity and launch phishing attacks on others in his/her social circle to steal their credentials, personal information, or sensitive data.

Virtual currency fraud: Virtual “currencies” that are worth real money include reward points, promotional credits, and in-game virtual items, which can be harvested for real world gains.

Organized crime rings are performing account takeover at scale by leveraging massive bot armies to attempt password-cracking attacks at various consumer-facing websites. Just how big are these armies? In a mass ATO attack the DataVisor team recently discovered at a large retailer website, bot armies made more than 300,000 login attempts from thousands of IP addresses in the course of a single day. Each IP address was used to attempt logins to approximately 100 distinct user accounts, with a different browser cookie used for every login, likely to skirt security solutions based on device tracking. The map below shows the geographic distribution of the attacking IPs, which are located in residential networks from all over the world. 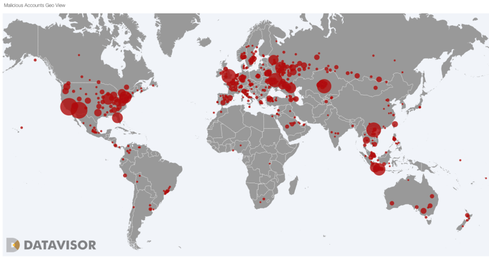 Map of IPs from a widely-distributed password cracking botnet attack.


The vast majority of the attempts involved accounts that all had valid email addresses registered at this particular retailer. The success rate of the login attempts was not very high, only 8%, so it is likely the attacker obtained the usernames from third-party data breaches. Users that have weak passwords or reuse them at other services are especially at risk (as shown by the recent attack on Fitbit accounts).

After the initial ATO stage of the attack, the same attackers looked to immediately put these stolen credentials to use. In this particular attack, DataVisor detected attempts to validate stolen credit card numbers by testing them within the compromised users’ payment profile page, an attack we refer to as an “oracle test.”

If the credit card is invalid or known to be compromised or stolen, the site will reject the card and display a warning message. This feedback essentially turns the service into an online credit card “oracle” where fraudsters can verify their bulk card purchases from the underground market. This is similar to the attack technique used by botmasters to query public IP blacklists to check whether their spamming bot2s are blacklisted. 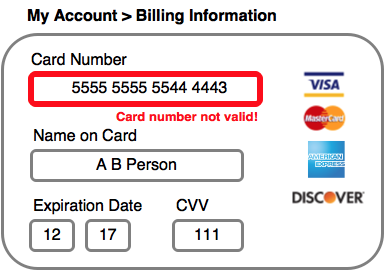 Compromised accounts are exploited for financial gain, but it’s not only retailers or financial services that are vulnerable and at risk. There are plenty of virtual “currencies” that are worth real money, including reward points that can be converted into merchandise, flights, hotel stays, and gift cards, virtual items in online games that can be sold (sometimes for hundreds of thousands of dollars), and social reputation that can be exploited to boost business sales or ad revenue. This makes most, if not all, consumer-facing services prime targets for ATO attacks.

As the saying goes, “money isn’t everything,” and these attacks can impact more than just the financials for modern online services. With consumers becoming more conscious about their online security and privacy, the impact of ATO to brand name reputation is especially harmful, and will likely to affect user growth and revenue in the long term.