At Black Hat, researchers showed how a vulnerability in Cortana can unlock a locked Windows PC. Microsoft has patched the flaw, but questions remain.

Amichai Shulman and Tal Be'ery from Kzen Networks, along with Ron Marcovich and Yuval Ron from the Israel Institute of Technology, showed how Cortana's default settings could wreak havoc when abused. The researchers noted that Microsoft has patched this particular problem (CVE-2018-8140) in June, but added there will be other vulnerabilities emerging due to the underlying problem.

Exploiting the vulnerability does not involve any external coder unusual system calls. Code focused defenses such as antivirus, anti-malware and IPS will be blind to such an effort. 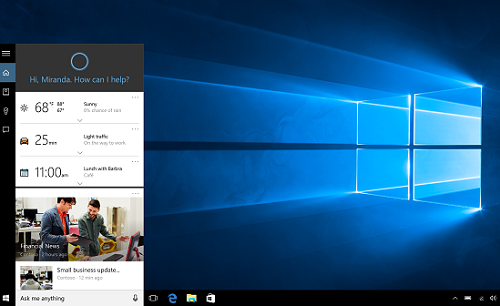 The researchers believe that adding functionality to a locked screen is the root of the situation, and it is dangerous. They conceptualize the lock screen as another desktop with a limited access. That limiting is what reduces the attack surface. Adding additional apps or functionality will only grow that attack surface.

The researchers found they could then launch local commands without the need for further authentication or user validation. They wrote that they were able to "take over a locked Windows machine and execute arbitrary code. Exploiting the 'Open Sesame' [their moniker for it—ed.]vulnerability attackers can view the contents of sensitive files (text and media), browse arbitrary web sites, download and execute arbitrary executables from the Internet, and under some circumstances gain elevated privileges."

This is a major responsibility shift showing up. The OS used to guarantee the UI was not accessible when the computer was locked. Now, developers need to be aware of the computer's state and not assume a lock will hold.

Mitigating this form of attack is problematic, according to the research report. One method is voice identification. Specifically, that means having Cortana respond to only one speaker. That might stop "evil maid" scenarios -- where someone else tries to access an unattended locked machine -- but will fall to a recorded voice sample of the authorized users saying the opening phrase.

A network-based intercepting proxy, however, has more appeal. It would require that a TLS/SSL certificate be installed on monitored devices. Some organizations already have them installed for web gateway monitoring. Such a tool would monitor all Cortana requests and responses, and could block or modify them.

Until that tool is here, however, the researchers suggest totally disabling Cortana voice in corporate environments. If that is not possible, disabling it on locked screens may help.

This vulnerability shows how an interface change can affect an entire system. More than just secure coding, secure system engineering is required.